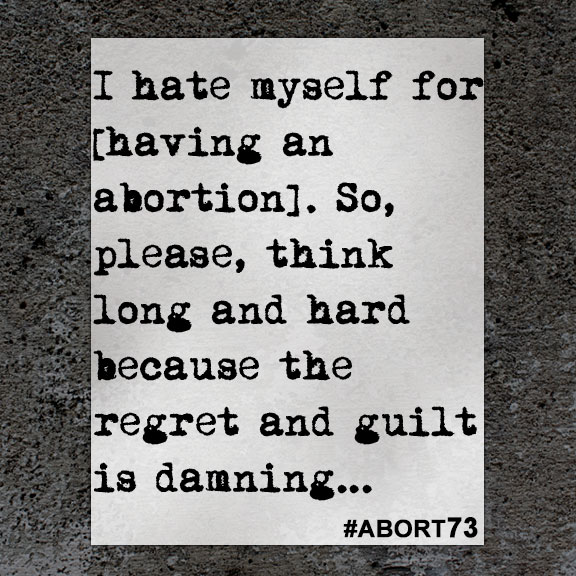 I hate myself for [having an abortion]. So, please, think long and hard because the regret and guilt is damning...

I had my abortion 5 months ago and I regret it to this day. I am 22 years old.

My boyfriend and I have been together for five years, and we have plans on getting married and having a family once we are financially stable. We are both career driven, but we both want a family. We have always been careful, but on this occasion, we took a risk and had unprotected sex. I had just come back from a holiday with my family and we hadn’t seen each other in three weeks.

I realised my period was late and thought it might be the change in climate. My period is usually always on time, but I didn’t think much of it because I thought we had been so careful for five years. I couldn’t just get pregnant straight away. I was wrong. I started to think I was pregnant when my boobs felt really sore. I was very tired and started feeling nauseous every morning. I was staying with my boyfriend for a week and decided to take a pregnancy test. It was positive. I couldn’t believe it. I was so scared and immediately thought that I couldn’t have it. I wasn’t ready.

I went in our room and told my boyfriend. He looked surprised, but he seemed calm. He saw I was unsettled and cuddled me. He asked me what I wanted. I immediately started Googling abortion clinics and gave them a ring. I set a date for a consultation which was two weeks away.

All I could think of in my head was how this wasn’t the right time. I wanted to build a career for myself. I wanted me and my boyfriend to buy a home, get married, and then have a baby. I believed I wasn’t ready. My boyfriend understood all of this and said he would support me either way. He mentioned that he wanted to keep it, but he didn’t want to pressure me—so he would support my decision.

The consultation was surprisingly calm; it felt surreal. I had distanced myself from the thought that I had a baby inside of me and tried to be as cold and logical as possible. I was five weeks along at the time of the consultation and had booked my aborting which was in two weeks time. Leading up to the abortion I tried to not think of it at all. I busied myself in my work, and my boyfriend was being supportive.

On the day of my abortion, my boyfriend seemed quiet. I could tell he wasn’t happy, but he was trying to support me and be there for me. He seemed upset. I was nervous and scared, but I believed this is what I had to do and this was the right thing to do. I hadn’t told my parents. My dad liked my boyfriend and supported our relationship, but my mother didn’t. I didn’t want to cause unnecessary problems, so I thought it would be best to not mention it. I didn’t want to feel as though I disappointed them.

I got called in to a waiting room. I was told to undress and put on a hospital gown. My stomach felt funny and doubt started creeping in. I had opted for a suction aspiration. This is where they use a suction tube to remove the pregnancy whilst looking at the ultrasound. I was then called in for the procedure. The nurses and doctor were very friendly. They spoke to me to distract me and held my hand. Just before the doctor began, something inside me wanted to scream, ‘I don’t want to do this anymore. I want to have the baby; I cant do this,’ but I battled with it. I told myself I was here now and there was no going back. The procedure lasted five minutes. Sharp cramps but nothing dreadful. I was taken to the recovery room and was released after 30 minutes. My boyfriend dropped me home and made sure I was okay.

For the next week, I bled a small amount. I felt relieved, but regret was slowly creeping in. My partner revealed to me that he really really wanted to keep the baby. He was angry that I decided on an abortion, but said he didn’t hate or resent me. He was just finding it hard to process. I felt awful. I had the man of my dreams, and we were building a life together. The baby came earlier than planned, but babies are a blessing. All I could think of was, ‘what the hell have I done?’

Exactly one week later, I started to bleed so heavily that clots the size of a large apple were coming out of me. My father was home, and I revealed to him that I had an abortion, and I thought something was wrong, and I needed to go to the hospital. I was bleeding so much. We called an ambulance, and I was taken to hospital. They did a scan, and the pregnancy was still there. They said they had to do surgery to remove it. I felt horrible. This baby, our baby was fighting for life so much at just 7 weeks old that the first abortion couldn’t even get rid of it. How could I have done this? I had lost so much blood that after the surgery I had two blood transfusions.

My boyfriend, bless him, he stuck by me through it all. To this day, he says he doesn’t hate or resent me. He just hated my decision. He’s happy to move on and help me recover. Today, five months later, I was in bed crying and having flashbacks of what I had done. I regret it immensely. Our baby was a life. I got rid of that for my own selfish needs. I almost lost my own life. I still don’t judge those who choose abortion, but please, before you do, really really think it through. The mental impact it has is huge. I struggle all the time with what I’ve done. I hate myself for it. So, please, think long and hard because the regret and guilt is damning.