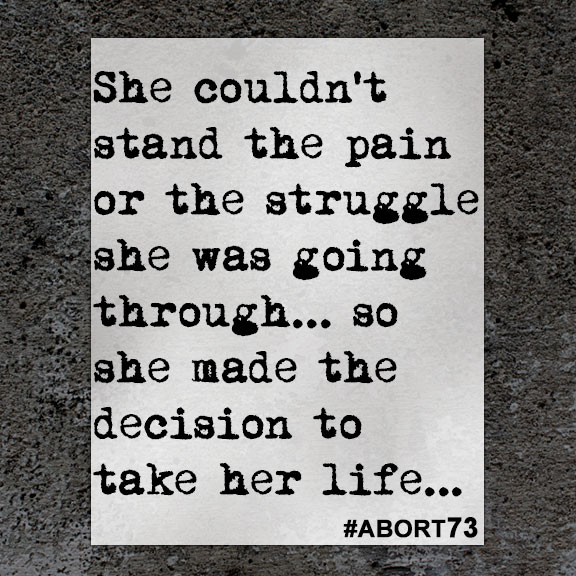 She couldn't stand the pain or the struggle she was going through... so she made the decision to take her life...

Even though I'm a woman, the story I'm about to tell you is not about myself—though it has impacted me and my family for the last six years. My older sister had an abortion back in December 2012. We were living in the US at the time, and I was the only one who knew back then about her decision to abort—hence the guilt I feel regarding this situation since, looking back on it, I feel I could have done something to prevent it from happening, but I didn't. Almost a year after the abortion, she still wasn't able to let it go. She couldn't stand the pain or the struggle she was going through because of that decision, so she made the decision to take her life on September 6th, 2013—dying of an antidepressant overdose at the age of 20. She didn't actually tell me why she did it, but I found out she had this abusive boyfriend that wanted her to abort, and despite doing so, he dumped her shortly afterwards. Her suicide really triggered and saddened my parents. They have been as sad as I have been since her suicide. Sometimes I try to calm myself down telling myself that I was ignorant in such topics and that I did the best I could do at the moment, but her absence makes me still feel remorse, though I know it wasn't my choice nor my fault. I felt compelled to post our story here to let readers know that they're not alone or that it's not too late to change your mind, and that there's people around you that love you and are willing to help you go through this.