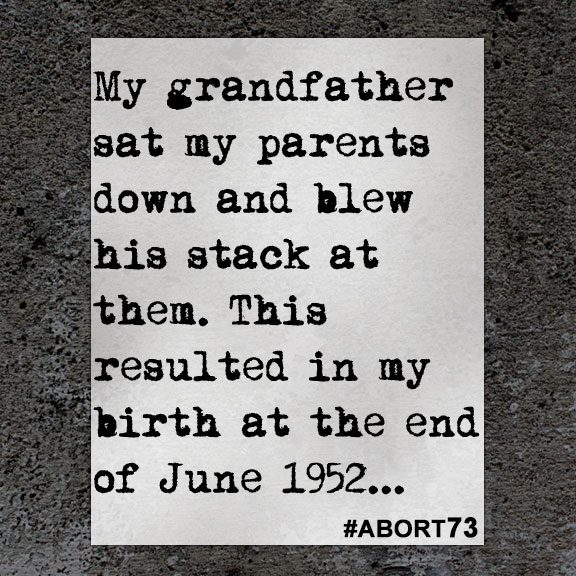 My grandfather sat my parents down and blew his stack at them. This resulted in my birth at the end of June 1952...

My parents are deceased now. My mother passed in January 2019, my father in July 2014. They were a professional dance team who met on a blind date in 1949. On that first date they went to a mambo dance competition at a night club in Long Beach, Long Island. With luck and their natural born talent, they won first place and split the $50 prize money. With that, they went on to become fixtures at the Palladium Dance Hall in NYC where they continued winning mambo competitions. They tried out for and won full scholarships to The Katherine Dunham Dance School, where they got their first exposure to ballet and jazz dancing. Somewhere around this time they decided that professional dancing as a career was where they wanted to go, and to devote themselves to this above all else. They married in September 1950. This is what I already knew. The story I tell now was told to me by my father's younger brother. Soon after they married, my mother became pregnant and they knew that a pregnancy at that time would be a big impediment to achieving their career goal so it was decided that my mother would get an abortion—which was illegal in those days. Soon after that she became pregnant a second time with the same result. Then around the end of September or early October 1951, she became pregnant a third time and they were making plans for yet a third illegal abortion, but something was different this time. My grandfather, who was a merchant seaman, was home on leave from the merchant marine and he caught wind of their plans. Somebody wized him up. So according to my uncle, my grandfather sat my parents down and blew his stack at them. This resulted in my birth at the end of June 1952. My parents loved and cared for me a lot and raised me right. My mother told me decades ago that she had a miscarriage when I was ten, but is that true or did she have another abortion? I have no siblings.