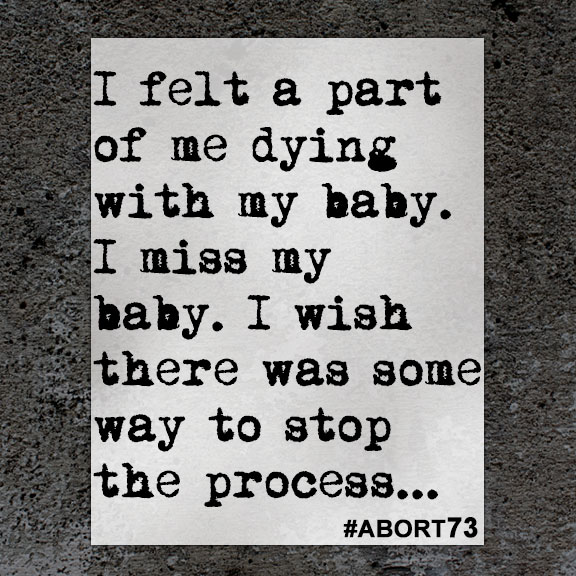 I felt a part of me dying with my baby. I miss my baby. I wish there was some way to stop the process...

I was 21 years old when I first found out that I was pregnant. I was not doing any job, and my boyfriend was still completing his schooling. We were very new in the relationship and didn’t know what to do. The best option that time was abortion. My boyfriend bought abortion pills, and I took them without any medical assistance. The next week was so bad. I regretted taking those pills. I’d always wanted to be a mom, but when I was gifted with a baby I killed it myself. I told my boyfriend that I was not going to have another abortion, to which he agreed.

About four years later I was pregnant again. This time my boyfriend was about to move away from me. Since we had to be in a long-distance relationship, he said to abort the baby. I was not married to him, so keeping a baby in a long-distance relationship would be tough. I finally told him I was ready for another abortion. I was not mentally ready, but I didn’t have any other option. He again bought me some pills without any medical assistance, and after holding them for like two hours, I gathered the courage to take them. I came back home and tears started coming out of my eyes endlessly. I so wanted to keep that baby, but I once again killed it. My boyfriend left me for his career two days later. I suffered alone. I was heartbroken. I had no one to talk to. And I realised that  I had made a huge mistake by aborting my second baby. The father feels nothing about abortion; he said every couple does this and it’s a normal thing to do. But I felt a part of me dying with my baby.  I miss my baby. I wish there was some way to stop the process.

Today I am suffering from endless medical issues and infertility. I guess this is the punishment for killing an innocent soul. I don’t know if I will be able to bear a child ever again, but I do wanna tell all women carrying that little soul: don't abort! No matter what happens and what others say. Once you see the face of your baby, I am sure you will feel proud of your decision.