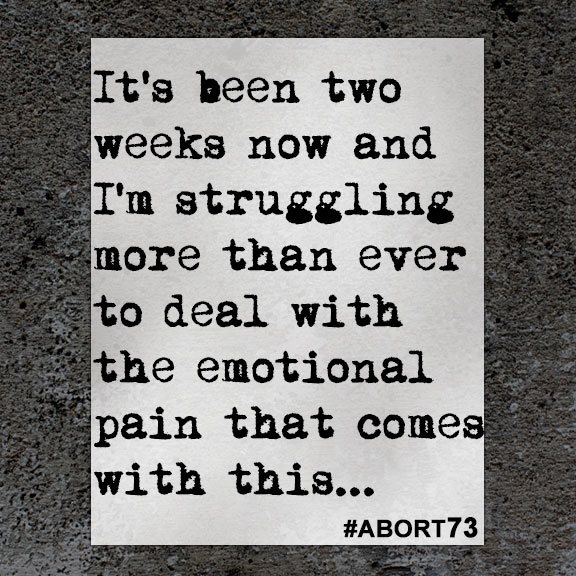 It’s been two weeks now and I’m struggling more than ever to deal with the emotional pain that comes with this...

I found out I was pregnant on the 11th of June. That whole day I kept it a secret to myself, eventually telling my boyfriend the following evening in bed. He looked at the test and after a few minutes said, ‘It’s ok, we can get an appointment for an abortion’. I was 50/50 on what to do. I booked an appointment with my GP and was seen a week later. I told her I wanted an abortion. She referred me to an abortion clinic for two weeks later.

During this time, my emotions and mental health only got worse. The longer I waited, the worse it got. I would cry at night and my boyfriend would just turn his back on me. I tried to tell him my feelings, but he was just not considerate and didn’t understand. I arrived at the clinic filled with so much dread. The nurse did a scan on me and told me I was 10.5 weeks. She then referred me to the hospital for an abortion one week later.

Eleven weeks and four days. By this point, I didn’t even want to go through with this anymore. I wanted to keep my baby and somehow make finishing my final year of college work at the same time. I didn’t want to go through with it. My boyfriend, however, was adamant that this is what we should do. So I did it. While in the hospital room, about three hours after taking the pills, I felt a massive rush of liquid come out of me. I ran to the bathroom, dropped my trousers, and a huge flow of blood fell on the floor. I sat down on the toilet and within seconds had passed my baby.

It’s been two weeks now and I’m struggling more than ever to deal with the emotional pain that comes with this. I didn’t want to do this; I knew deep down we could make it work. I let my decision be made by my boyfriend. I wish I’d done differently. Please think about what YOU want to do. It’s your decision. I just hope this horrible feeling eventually gets better.