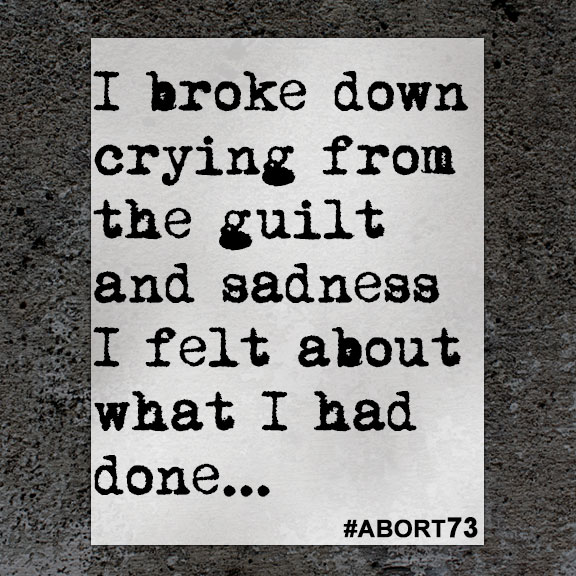 I broke down crying from the guilt and sadness I felt about what I had done...

When I was 20, my period was late—which I put down to stress. Then I had a dream of being in my parents' house holding a small baby with black hair. A pregnancy test showed two red lines. It felt like a punch in the gut. I rushed out to my boyfriend in tears and showed him. Immediately he offered his support and told me that he would always be there to support his child.

But I was a mess—a jumble of depression, anxiety and low self-esteem. I told him immediately that I couldn't do it, that it was impossible, that to have a child now would ruin both our lives. He told me that it would be fine, but supported my decision to seek out an abortion.

I was able to get an abortion funded through the NHS, but first I had to attend a clinic and have a consultation and a scan to see how many weeks pregnant I was. I lay on the bed as the sonographer rubbed the gel on my belly. She told me I was five weeks pregnant.

"No." Already in tears, I couldn't face looking at what was on the screen.

They offered me either a medical abortion or a surgical one. I could take a pill immediately and begin the process, but for the surgical I would have to wait two weeks. I chose surgical under a general anaesthetic. I wanted to distance myself from the whole experience as much as I could.

The wait was torturous. At the time, I was working part-time with my mother for three days a week. The whole time my heart felt heavy, and I longed to just tell her that I was pregnant. But I knew she would try to persuade me to keep the baby, so I stayed silent and kept working as the symptoms of morning sickness began to creep in day by day. When I wasn't working, I was researching what 5-, 6-, and 7-week old embryos looked like, if they felt pain or not, if they even counted as being alive or not. I read blogs on becoming a mother at a relatively young age and still being successful. I even prayed for the first time in years, despite being an avowed atheist at the time.

I began playing the lottery, desperate for some magical easy solution to make the pregnancy okay and give me some assurance that having a baby would be fine. I told myself that if I won a decent amount of money I would keep the baby. At the time, I couldn't see that I actually wanted to carry on the pregnancy—scared and blinded by panic.

But two weeks passed, and no solution came. I took this as a sign I was meant to have an abortion. So I went to the clinic. I was put into a waiting room with lots of other women, most of whom seemed to be late teens/early twenties. I remember thinking how bizarre it was that we were all here for one reason. After a meeting with a doctor, where I confirmed I was 100% certain about ending the pregnancy, the documents were all signed and I was moved to another room to prepare.

I joked with the nurses as I was wheeled in to theatre and felt relaxed as they put the mask over my face and told me to breathe—certain that I was doing the right thing and that this would put an end to my problems. That night, I had a dream. I was holding the same baby in my arms when its body began to rot and wither and crumble. I woke up, sickened with myself, but tried to carry on with my life as normal. Sometimes I'd see babies and feel a pang of sadness and longing. About a year after my abortion I was with my boyfriend in a coffee shop and I caught a glimpse of a baby. I felt the tears well up, and when my boyfriend asked me what was wrong I said, "I wish I could have my baby back”.

But I didn't feel the full force of the decision I made until I was six weeks pregnant again, this time with a wanted baby. I went for a scan and saw my tiny baby, measuring less than 1cm in length, and felt happy when I was told she had a good strong heartbeat. I felt in awe of what I was carrying inside me. A few weeks later, my partner asked me how old our other baby would have been if we had kept it. I broke down crying from the guilt and sadness I felt about what I had done, though my partner told me that I did nothing wrong.

At the time, I thought I was making the best possible decision for myself. I see now that I felt trapped and only had one way out—through an abortion. I have a baby girl now. She's sweet and lovely, and sometimes when I look at her I wonder if she would have had an older brother or sister, if only I had been brave enough to do what my heart was telling me to do.

So to my first child: I'm sorry.