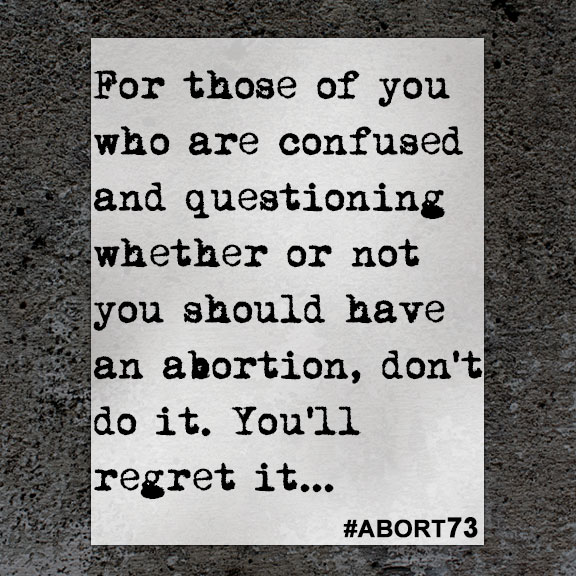 For those of you who are confused and questioning whether or not you should have an abortion, don't do it. You'll regret it...

I sit here as a new mother still haunted by a decision I made 10 years ago. I don't think about it every day, but today is February 10, 2019, and everyone is talking about the new abortion law that got passed in New York. Again, my secret that I continually try to bury away, is coming around again.

Flashback to early this morning, me sobbing on my husband's shoulder while we listen to our pastor talk about it. My secret.

I was 20. I had been dating a guy for a good couple years. He wasn't the worst of guys, but certainly not a keeper. Mostly, things were about him, and I was there for the ride.

I still to this day remember taking the test in his bathroom at his mom's house. I remember seeing the test and for a split second I was ecstatic, because I love children and babies, and I thought, 'I'm pregnant!' And then reality sunk in, and I remembered our previous conversation and I was crushed.

Justifications about why I shouldn't have this baby cluttered my mind. Well, I had been smoking a whole bunch, and drinking, and I had just done some drugs—this baby is probably already damaged. I'm doing the right thing.

The most ugly parts of me came out in the moments leading up to my abortion. I remember leaving the Health Care Services building outraged that they were giving me troubles because I needed them to pay for this thing.

And then they did, and it happened so fast.

I went in for an ultrasound. They don't show you what the baby looks like. They don't want you to fully see and realize that you have a perfect little growing human in there, because I assume they know that if you're like any other normal woman out there, you would most likely change your mind. Then the day of the actual abortion. I remember two other girls there that day so vividly and drastically different.  One was an Asian girl; the other brought her friend and was sitting there overly boisterous as we heard the pro-life advocates preaching outside—pretending to be unaffected. I often think about these girls and wonder how they are doing.  Do they regret their decision? Are they haunted like me? Did they end up telling their parents? Do their husband's know?

As for me, I was alone in there. Already regretting my decision. Wanting to leave. But not doing a damn thing!

The procedure is quick, I think, time seemed to stand still. Obviously, you get some drugs that put you out.

I have never been so depressed in my life as I was during the months afterwards. The tears that I cry from this complete and utter mistake literally throb throughout my whole body, leaving me in this sort of blackness. Oh, how I wish I could rewrite that chapter.

I didn't tell anyone about my abortion until I decided to leave the boyfriend some three years later. Then I told my closest friends and my parents. They all seemed to understand and said supportive and nice things. Now if you fast forward, I'm writing this and my rainbow baby is sleeping. I have also experienced a miscarriage.  This happened almost three years ago. When I miscarried, I thought God was punishing me for the abortion. So I decided to do some work and went back to the clinic where it happened and stood alongside those pro-life advocates. I shouted my words through tears and I got hateful screams and laughter in return. And I remember all too well that I had been in those same shoes and done those same things.

God does forgive us. I know I am not excluded from that. However, that doesn't get rid of my deep regret. It's a really weird, gross feeling when someone talks about how horrible abortion is and you agree, but yet you had one yourself.

For those of you who are confused and questioning whether or not you should have an abortion, don't do it. You'll regret it for the rest of your life. Find someone to adopt your baby, but don't end that precious baby's life. As a new mother, I sobbed the first time I saw my baby's heartbeat, and that was only at about 8 weeks. It was the first time out of three pregnancies that I had ever gotten to see my baby on the inside.

There is no nice way to put it. Abortion is murder, and I can't even type it out, but I did that to my baby!!

For those of you who have had abortions, I’m so sorry. I'm sorry if you would have had your baby if it hadn't been for someone else convincing you otherwise. I'm sorry that you feel like a complete pushover because you were too weak to actually choose for yourself what you knew was right. I'm sorry if you completely thought you were doing the right thing. I'm sorry because I see and know your pain.

I've kept this a secret from most people for a really long time, but I'm thinking it's probably time I use my story to do some helping.

I hope that you will find the courage to share your story to help those facing the same decision. I hope that we can somehow convince them not to make the same mistake—and if not then, I hope we can be there for them as they sob out every ounce of themselves.

One last thing that really helps me is this. I know I am forgiven because God allowed me to have this special little baby, and he is one of the sweetest gifts I could ever imagine and I am so, so, so, so grateful!!!!