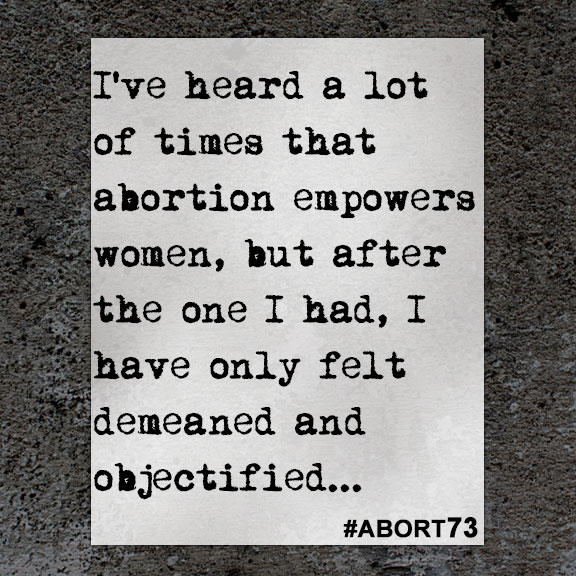 I've heard a lot of times that abortion empowers women, but after the one I had, I have only felt demeaned and objectified...

Before I get started, I feel glad about finding this web site and having the chance to open up. I realize now that I am not the only woman feeling hurt and fooled. Don't get me wrong, seeing other women suffering doesn't make me feel good. I just needed some moral support, which I found in their stories. It's been hard for me to even say anything about it, as I live in a society where abortion has been glamourised and no one thinks it is something bad. Therefore, it has been practically impossible for me to find someone that understands how I feel, someone to trust my feelings. Back in 2006, I got pregnant by my then-boyfriend, who was my same age. Both of us were 17 then; neither of us was able to raise a child then, and both my parents and parents-in-law wanted to get rid of it, so they got an abortion for me, which unfortunately, I had. I never thought I would be living proof of the horrific consequences no one ever talked to me about. No one seems to care; it's like talking about everything I've felt and been through was taboo.

I don't know—or at least I don't remember—if I wanted to keep it, but I don't think it was fair to not let it live. About three years afterwards, I noticed that I couldn't stop thinking about it. I started to feel disappointed with my parents and started hating them. It had been a while since that guy and I had broken up, so I didn't care much about him, but I started crying every night. I wasn't able to sleep properly, and I tried to kill myself many times. I realized there was something wrong when I saw myself in the middle of that and somehow, at the bottom of my being, I knew it was because of my abortion. I've heard a lot of times that abortion empowers women, but after the one I had, I have only felt demeaned and objectified.

I'm glad I was able to get a little over it and get married. I currently have three kids, which is unusual for a young woman here, but all this time I've been hoping the one I never gave birth to forgives me.