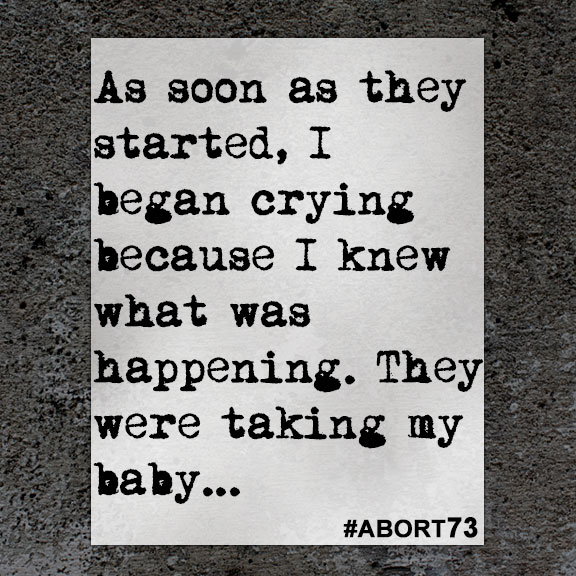 As soon as they started, I began crying because I knew what was happening. They were taking my baby...

January 9, 2016, will forever remain in my heart. I found out I was pregnant on Christmas. Before I even took the test I just knew. I kept getting sick and feeling tired out of nowhere. I didn't even think twice about it until a friend of mine mentioned taking a test. When I finally got my hands on one I immediately saw the two bold lines and started balling my eyes out because I knew it. I felt like my whole life was just slowly and painfully tumbling down. The father already had two children by two different women, and I didn't want to fall in the "baby momma" category. I knew what I had to do and it scared both lives out of me. I was stressing over it so much that I lost the job I had just started. I felt like right as my life was coming together somewhat, it decided to come down on me again. So I saved all my Christmas money and the money from my last paycheck because I wasn't sure if my insurance was going to cover the procedure and I couldn't go to my family. I found out my insurance would cover it, but I decided to pay an extra $50 for what I was told would be anesthesia, because I knew I couldn't go through with this completely aware and awake. I made my appointment and the few days went by so fast. Saturday at 12:15 came so fast, I felt like. The father was completely insensitive towards the whole situation, until I finally said I made the appointment. It was like he finally got what he wanted so he was cool with speaking to me and filling my head with empty promises again. I spent the night before with him and it was almost perfect. He held me in a much different way. It was the first time we saw each other in a while, and this time I was carrying his child. At first I wanted him to come with me, but as the days came closer I decided I didn't want him there. I was almost embarrassed. When I got there it took a few hours but eventually I got my ultrasound done and paid. Then was handed two Zanex. I was under the impression that I was being put to sleep, not given the same drugs I used to party with. I was so upset and angry, but I knew I couldn't leave after all that. As soon as they started, I began crying because I knew what was happening. They were taking my baby that I wish I could have kept, but I just wasn't in a position to care for a child yet. I was supposed to spend that night with the father, but he was out with other women. He acted so differently the moment I told him I left the clinic. Now I feel used, empty, and purposeless. I wish I would have kept my baby. I will forever think about the “what if?” What my baby would have sounded like, looked like, smelled like. Every possible detail will forever follow me.