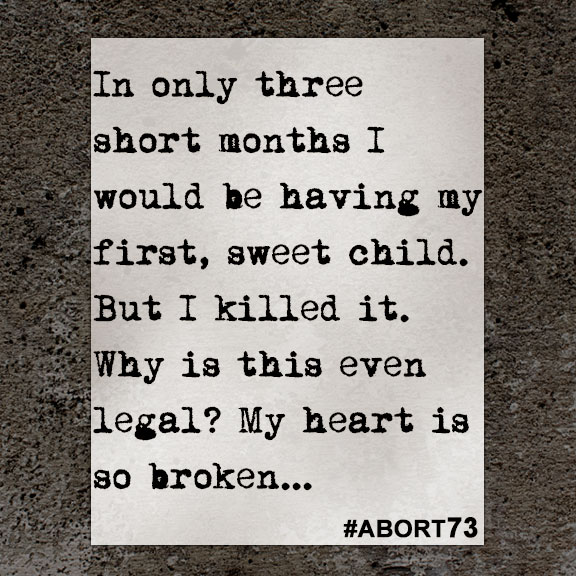 In only three short months I would be having my first, sweet child. But I killed it. Why is this even legal? My heart is so broken...

We met in college in 2013—far away from both our homes. He was a college baseball player, and I was just a plain jane, small town girl. Baseball was his life, his passion. In July 2015, I found I was six weeks pregnant. He was continuing his college career playing baseball, and I had moved home. He told me what I had to do. I understood. He had no income. He played baseball year round. He lived three hours away. He’s worked his whole life to make it to the MLB. At first, I told him no. But then I understood that abortion had to be done. My mom went with me. She was supportive. I still have two years left of college and I was nowhere near ready to bring a baby into my unsteady life. It was not fair.

I had a surgical abortion and that was it. I cried before and a little after, but it wasn’t until recently that it has really affected me. Six months later I watched my boyfriend hold a new born baby for the first time. The way he looked at her has my heart so broken. I have cried every day now asking myself why. I wonder how I would look, and I wonder what my baby’s gender would be. I hurt in the worst way possible. It is a feeling that only others who are grieving abortion know what I am talking about. I question my morals daily. What did I do? Why did I do this? In only three short months I would be having my first, sweet child. But I killed it. Why is this even legal? My heart is so broken.