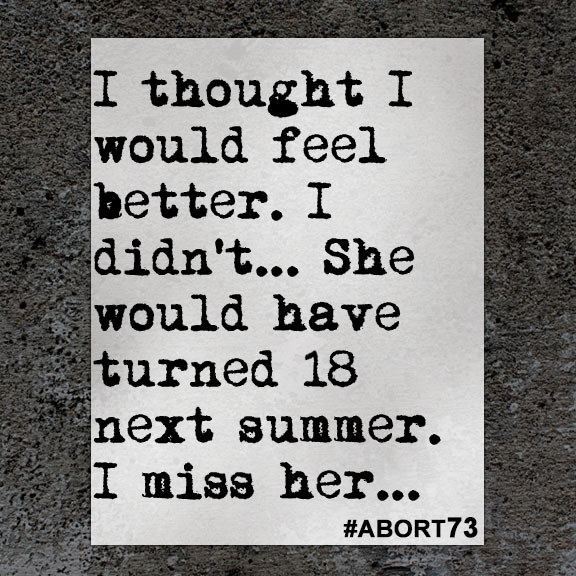 I thought I would feel better. I didn’t... She would have turned 18 next summer. I miss her...

I was 25 and in a relationship with someone who was totally wrong for me. We weren’t even officially dating, just spending a lot of time hanging out and drinking together. I found out I was pregnant in the fall. I took a test at Planned Parenthood of all places. The nurse/counselor, whatever she was, was nice. I panicked and told the father. We talked about having the baby, but really, we both knew what the outcome would be.

He had a friend who was part of a woman’s group who could help me. One night a group of women came over and performed the abortion. They told me to call him after they left so he could come stay with me and make sure I was ok. I called him, and he was asleep. I told him we were done, and he should come over. He said, “I don’t know, it’s dark and rainy out. I don’t really feel like it.” I started to cry. After all of this, you can’t even come over?

I thought I would feel better. I didn’t. I have always had a feeling that the baby was a girl. No way to tell, I was probably only 8 weeks along. I started to miss her. I felt guilty. I never told my parents. At Christmas we went to church and I cried through the whole thing, feeling like a piece of garbage.

I told the father about my feelings. He said, “but women are supposed to feel happy and relieved after an abortion.” Maybe some woman do, but this one didn’t.

She would have turned 18 next summer. I miss her.