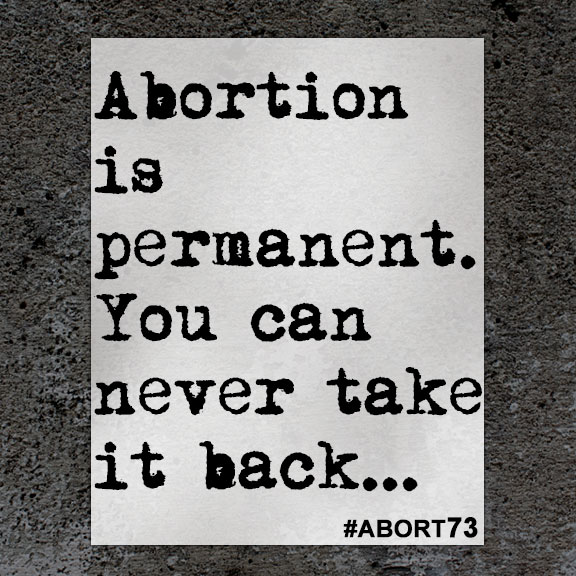 Abortion is permanent. You can never take it back...

I was a student at the University of Central Florida at the time. I was dating my ex-boyfriend, but things were complicated between us. My main focus was graduating and becoming a teacher. I had goals that were important to me. I would be the first in my immediate family to graduate from college. I was also raised in a very religious Christian home with strict beliefs, morals, and values. My parents held me to a high standard that I felt pressure to reach. My boyfriend at the time did not have goals. He was more interested in following his heart and passions.

During my junior year, I found out I was 6 1/2 weeks pregnant. I remember my life began to flash before my eyes. I was thinking about my goals and wondering how I would be able to accomplish them while trying to raise a baby. I was worried about how we would make it financially, being that my boyfriend was confused about what to do with his life. He was working a minimum-wage job and had no high school diploma. I was consumed with stress, worried about the future and what my closest friends and family would say. Deep down inside, I grappled with feeling torn between keeping my child or doing what was best for me.

I decided to have an abortion at 10 weeks. I now realize that what was best for me was to give birth to my child, but it is too late to go back and change my decision. I remember going through with it, and ignoring the faint voice in the back of my mind telling me not to do it because my fears were louder. After the procedure, I promised myself to never think about it and decided that I would act as if none of it had ever happened. Unfortunately, it wasn't that easy to do. My relationship with my boyfriend at the time ended up getting even more challenging until we decided to break up. So there I was, a single, full-time college student, hiding every emotion, thought, and memory that had to do with this abortion.

As I entered into my senior year of college I remember being consumed with guilt, depression, and self-hatred. What had I done? I killed my child. I had no right to do so. Thoughts about what my life would have been like as a mother started to consume me. I thought, "Maybe I could have done it—I should have tried." My entire senior year of college was so tough. My decision to abort was taking a toll on me. By the time my graduation day came around, I wasn't even happy to be graduating. I felt as though I did not deserve to graduate because I knew the decision that I had made to get there was selfish.

Currently, I am teaching, living on my own, have a new car, and am pursuing my master's degree. Anyone would look at me and say, "She has it all.” Little do they know the inner battle I face from the decision I made to have an abortion. Abortion is permanent. You can never take it back. After all I have been through, the pain I deal with each day, the regret that haunts me, I can say that it is definitely not worth it. I just hope I can find the strength to forgive myself.