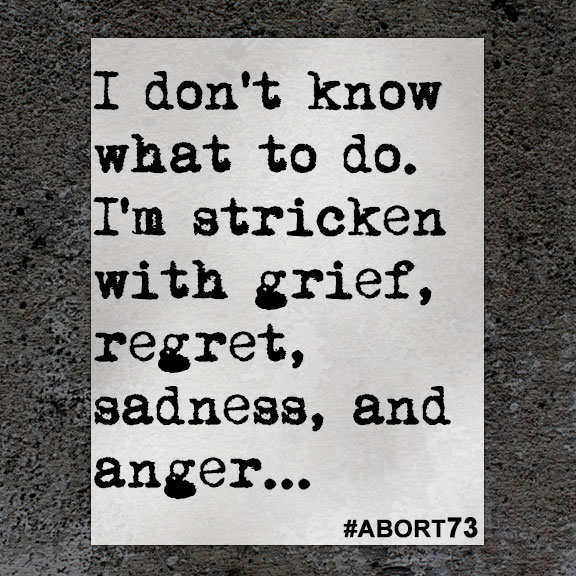 I don’t know what to do. I'm stricken with grief, regret, sadness, and anger...

I was 17 when I became pregnant with my boyfriend of 11 months. We are still together, going on two years, and plan on getting married in the next year or two. My heart dropped when I learned that I was pregnant, not only because I am a teenager, but because of my parents. I didn't learn that I was pregnant until about 4-5 weeks into the pregnancy, due to severe sickness. I lost three pounds because of the severity. When I told my mother, she was beyond angry. She yelled and brought up my age and how I needed to finish high school and go to college to get my degree in funeral services.

I planned on keeping the baby before I told her, but because of the whole ordeal, along with other heavy issues with my boyfriend's parents, I decided to abort my baby the same day—to keep my future and my boyfriend's future on track, so we wouldn't be weighed down by the amount of money that we didn’t have to raise a baby. I'd rather not tell the other circumstances that led to my decision. I called the nearest abortion clinic to schedule an appointment.

Two weeks later, I went in with my mother on Friday, April 28th. I didn't want this abortion. I wanted to keep my baby, but like I said before, circumstances just weren't good enough to bring this child into the world. I was 8-weeks pregnant when I had it done. They gave me the typical ultrasound. The nurse didn't show me it, but I caught a glimpse of what would've been my baby. It was a black orb on the screen. I tried not to feel or get emotional over it because they would then reconsider my appointment. I then got into the white gown with blue sock-type things over my bare feet and a head cover for my hair. And an IV in my arm for the drugs and anesthesia. I never had an IV in my arm before, so I was nervous.

I watched ladies come and go out of a room. They came out hunched over, holding onto the nurse so as not to fall because of the drugs and pain that comes with an abortion. My turn was next. A sweet lady led me into the white room. Laid me down on a table, and put me on oxygen while we waited for the doctor to do the procedure. The assistant sat next to me and talked to me to calm my nerves. She played my favorite musician throughout the whole thing, “Can't help falling in love” by Elvis Presley. The doctor came and told me what she was going to do. The IV started, and she began. I knew my baby was gone when I felt my uterus deflate from the D&C procedure. It was the most excruciating pain.

Once it was done, they lifted me off the table, and put on my panties for me. I looked at the table, and it was doused in blood. I then walked back with my nurse. She helped me into the chair, gave me a blanket, and gave me a nausea pill, a juice box, and a snack. My mother was next to me, but I didn’t want her with me. I would’ve rather had my boyfriend or no one, but I didn’t have a choice. I was in recovery for an hour, to make sure I had no complications, and then sent on my way.

The next week, on a Wednesday, I woke up in the worst pain I have ever felt. I couldn’t go to school. The medicine they prescribed didn't help. Nothing worked.  I then passed out that night due to the pain, and woke up hours later in complete silence. No pain. Nothing. Months passed.

It is now October. My baby would’ve been due on December 3rd. I regret getting it done. I want my baby back. I just need to power through the hell that is the rest of the year. I miss my baby. I feel guilt. I feel grief. My mom uses my baby against me when we argue now. That I'm not responsible. That she wasn’t dumb enough to get knocked up like me. I hate her. I wish she wasn't my mother. My boyfriend, now fiancé, promised me that we will become financially stable and we will have the baby we couldn’t have now. We nicknamed our aborted baby Bumblebee. I plan to get a tattoo of a bumblebee on my wrist to remember my baby by, and I will teach my future kids that there was a baby before them. It just didn’t get the chance to be born.

I feel incredibly selfish for my decision because I thought about my life and my boyfriend's life first. I feel women will hate me for the reason I got one. I don’t know what to do. I'm stricken with grief, regret, sadness, and anger. I hope one day I will meet my bumblebee and tell it that it was wanted like every other baby, and that even though its life was short, eight weeks short, that I loved it with all of my heart. I will never forget bumblebee. That’s my story. Thank you for reading. Venting this out makes me feel like I'm not alone, but I don’t know how many women are with me. Thank you.