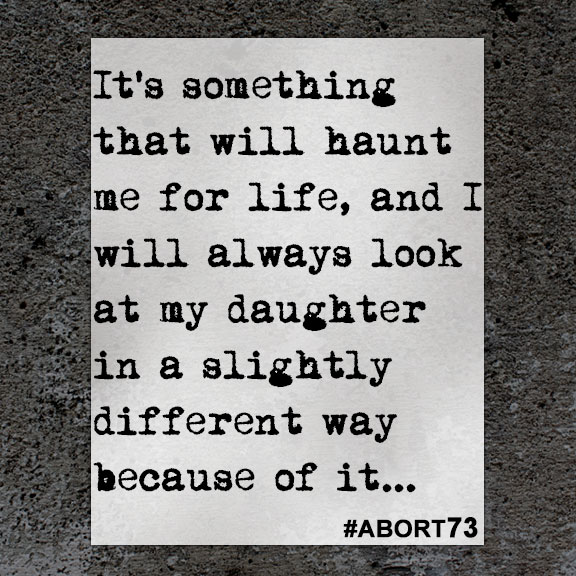 It's something that will haunt me for life, and I will always look at my daughter in a slightly different way because of it...

I had an abortion five years ago, and I still find myself crying about it. I saved myself for marriage, did everything right, and my husband and I got pregnant. Nine weeks later we found out we had twins. Having one baby was crazy enough, but I could not see myself managing two. My husband and I starting talking about it, but neither of us would say the "a" word, yet I knew he was thinking about it just as much as me. Long story short, we decided on abortion. It was the best "choice" for the both of us. I had my abortion at 11 weeks, 3 days. I instantly regretted it! I cried all the way back home, a long 3-hour drive! A couple months later, I was pregnant again. It was something that we planned on doing, and yet it was probably more my idea as I needed it. My daughter is coming up on 4-years old now, and I love her dearly. But every time I look at her, I think of those twins that I didn't care for. I never will forgive myself, and I sometimes blame my husband just as much as myself—as he also made the decision. It's something that will haunt me for life, and I will always look at my daughter in a slightly different way because of it.