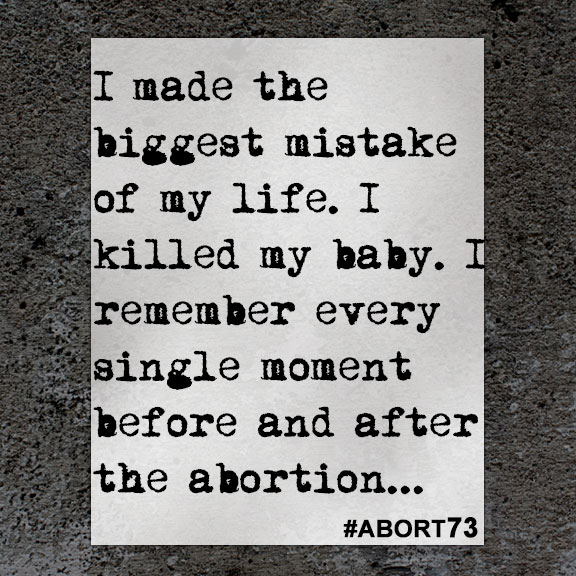 I made the biggest mistake of my life. I killed my baby. I remember every single moment before and after the abortion...

There are so many thoughts inside my head, but most of the time, even now, I feel like I'm not able to find the right words to explain this pain. PLEASE! PLEASE, DON'T DO IT! Ladies and girls out there, PLEASE DON'T! It was the 22nd of February, 2016. That day I died with my baby. I was all alone. From the first moment until the end. I didn't want to upset my family and it was wrong. Ladies, TALK to your family. I lost this chance. My family would be next to me, but now it’s too late. The only person who knew about everything was him, but he was absent. My "relationship" with my baby's father was wrong; it was a huge mistake. Until then I didn't really know him, as I found out. At first I was in a panic, afraid—and the only thing I thought about was abortion. The doctor told me that we had time and it would be better to think about it, because he was seeing that I was upset and confused. But I didn't give a little time to me and my baby. I didn't say anything to my "man.” After a few days, he realized that something was happening to me, and he pushed me to find out. When I told him, I got the worst answer he could ever give me. He told me: “Are you pregnant from me?” I couldn't believe it. Unfortunately, a few days later I made the biggest mistake of my life. I killed my baby. I remember every single moment before and after the abortion. I remember staring in front of the hospital alone, crying, wanting to run away, but I didn't. I gave up on my baby and now, about a year and a half later, I have mental and physical problems, that I deserve 100%. I’ve been praying for my baby to forgive his coward "mother.” At the end of September, my baby would have been one year old!