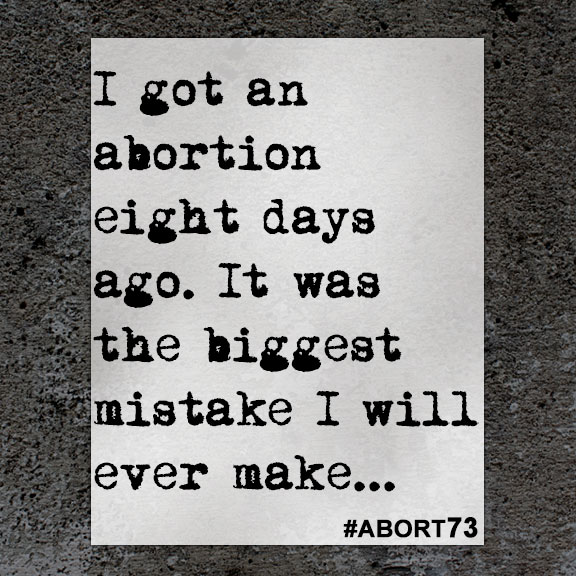 I got an abortion eight days ago. It was the biggest mistake I will ever make...

I got an abortion eight days ago. It was the biggest mistake I will ever make. When I found out I was pregnant, too much was going on in my life. I was in an abusive relationship, I knew a child shouldn't grow up around parents like that. I have serious Stockholm syndrome. I was also financially struggling since my partner doesn’t work and I went from making $800 a week to only $80. My family hated me when they found out. In my family, getting pregnant at such a young age and not being married was the ultimate unforgivable sin. My home was flooded with cards and phone calls to my mom with "prayers" and “I’m so sorry she turned out like this…” messages. It hurt. I was completely alone as I had no supportive family, an abusive partner, and no friends. Most people exaggerate when they say that, but it is true. I actually have no friends; the only human contact I get throughout my day is my boss telling me what to do next at work. I got my abortion because I did not love my child inside my belly; I wanted it gone. I was angry at the world for doing this to me. I felt like I'd gone through enough already—being sexually abused as a child by my uncle, my father leaving me and my mom, bullied at school, multiple suicide attempts from the age of 6 years old, hospitalizations throughout high school from drug problems to cope with my depression, and eating disorders. I’ve always been alone and now this abusive relationship I’m in is slowly killing me. I was angry that I couldn’t catch a break. I worked so hard in school because it was all I ever had growing up. I was in college when I found out I was pregnant, working hard in school to someday move to a four-year university, do a Disney College Program, and start my career marketing for the Walt Disney Company. It was all I ever wanted, and I was angry at myself, at my baby, at the whole world, even god—who I barely believe in anymore—for threatening all I've worked for. I thought long and hard for weeks, trying to love my baby, I even saw a damn hypnotist to try to be excited about pregnancy. Financially, I knew I could’ve done it. My partner’s family offered to help us out with money, and we could’ve gone to social security and got certain benefits, and he got a new job recently so I know we could’ve done it. It's just that I truly didn’t want to.

I decided not to read anyone’s abortion stories because I thought that it might scare me into not doing it. I wish I had. Now that I've done it, I see hundreds of women feel what I'm feeling: Regret.

I live every day in sadness. My partner’s sister is now pregnant and struts around holding her stomach. I'm so jealous. My best friend will deliver next month. I could've had that. My job with Disney didn’t work out, and I have no money for school—so now my abortion was for nothing. I gave up my baby for my job and school, which I've now also lost. I have nothing. My boyfriend is even worse to me now from his anger. He spread terrible lies about me that I did this without him knowing because it wasn’t his. Neither of those statements is true.

I am so alone.

I try to go out so that I don’t kill myself, and I see beautiful children playing outside—new moms walking with strollers, baby bumps all over. It makes me sick. What have I done?

All that runs through my head every day is what I've done. I want my baby back.

PLEASE, if you are reading this because you are considering abortion, unless there’s an extreme circumstance like rape, genetic diseases etc….

If the time comes and you still don’t want your bundle of joy, then plenty of people want babies and will adopt. It may be embarrassing to go through pregnancy and not have a baby at the end, but it is worth it. Trust me, you WILL love your baby. You are blinded by fear; the excitement WILL come. You are NOT alone!! Get counseling, talk to anyone!

Abortion is not the answer.