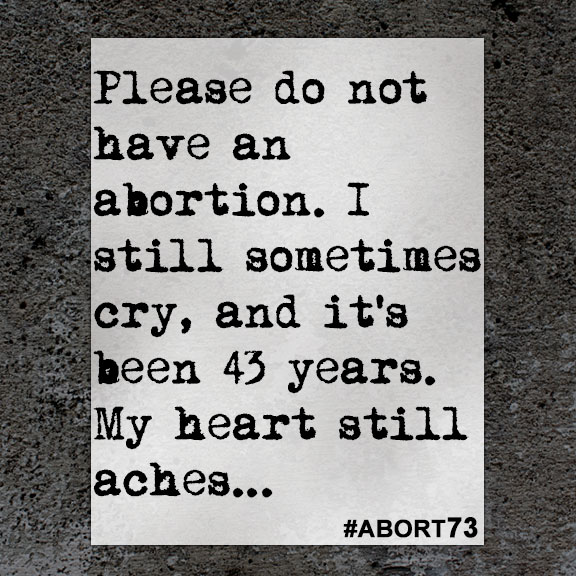 Please do not have an abortion. I still sometimes cry, and it's been 43 years. My heart still aches. ...

It was 1974, I was 16, and he was my first love. We’d been together for two years when I found out I was pregnant. It was summertime, and I got sick. I thought it was a summertime flu because that's what it felt like. I couldn't get my fever down—it was like 104—so my mom took me to the emergency room. The doctor there was concerned because my red cell counts were very, very low, so they admitted me to the hospital. They did some X-rays and lots of blood work. After all that, the doctor asked me if it were possible that I could be pregnant. I replied that it was possible because I was sexually active and my periods were not always regular.

The doctor did an exam and said he was pretty sure I was about two-months pregnant, based on the size of my uterus. I just started to cry and said, “Please don't tell my mother.” Of corse the doctor said they had to. I was so scared. My mom was pregnant herself, eight months along. They did some more blood work, and we told my mom. I just cried and cried.

After that, I told my boyfriend. He didn't have much to say. He was in shock too. Mind you, this was in 1974. There’s no way I could get birth control without my mom’s permission, and I didn't even know what condoms were. I was in love, and he got me to say yes to sex. I regret it to this day. On the way home from the hospital, my mom didn't talk to me at all. You could cut the air with a knife. I remember it like it was yesterday. My blood work came back positive; I told my boyfriend. He said, “Don't worry, we'll manage it.” He said he loved me and wanted the baby. I went to the doctor again the next week. He told us that because I had had several X-rays, the fetus could be disfigured and could have many problems. I still wanted my baby; I did not believe that what the doctor said could be all that bad. And if so, we would deal with it. What if I hadn’t been born perfect? The doctor suggested an abortion. I cried; I said no. My mom was quiet on the way home again.

I told my boyfriend, and he agreed with my mom and the doctor. We  had a really big fight over it. I never cried so much. My mom said, “You’re having the abortion.” I thought I could run away, but who would take care of us? I asked about adoption, but they never gave me that option at all. My mom took me to Planned Parenthood, and they made the arrangements for me to have the abortion. By the time I had it, I was almost 12 weeks. It was the worst day of my life. I remember fighting it when they were giving me the gas. After it was over, I never cried so much in my life. I was forbidden to see my boyfriend after that. And he didn't even act like he wanted to see me either. I was so full of hatred towards him and my mom. It took me years and years to move on from there. I could not forgive myself for killing my baby. I had a child at age 37, and I did finally forgive my mom and myself—only because I was at a place in my life were I felt god forgave me.

I still think of my child I could have had. I wonder what sex it would have been each February, when it would have been born. Please, girls, don't have pre-married sex. If you do and you find yourself pregnant, please do not have an abortion. I still sometimes cry, and it's been 43 years. My heart still aches.