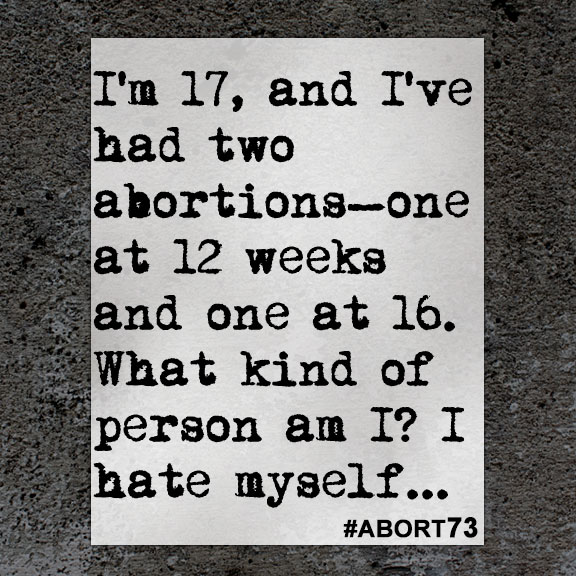 I was 16 and totally convinced I wasn't pregnant—just greedy and overeating. I thought that was why I had put on weight. But my boyfriend was scared, so we took a test. I wanted him to come in and take it with me, but I didn't want to ask him so I did it alone. Two minutes felt like two lifetimes and then, bang, I'm pregnant. I panicked and then for some reason almost smiled. I don't understand why. It wasn't like I wanted to be pregnant. I just wasn’t horrified that I was. I don’t know how to explain it. I went back out and told him; he was in shock. I just cried and cried, and he left me to cry and cry. This makes him sound bad, but really he's a good guy. We spent the whole day convinced we'd need to break up as I wanted to keep it and didn't want to force him to do something he didn't want to do.

I got in the car to go home with my dad, and he saw I'd been crying. He asked why. I told him, “Dad. I'm pregnant.” He goes “f—k.” That's all; just f—k. He then was so supportive and shocked me so much. I cried more. He told me he'd stick by me no matter what. When I came home to tell my mum, who I thought would love me either way, she made the deduction for me to have an abortion. She believed I was too irresponsible to make my own decision. So we went to my doctor, and I just pretended I was ok—when I just wanted to scream, “THIS IS EVERYTHING I DON’T WANT; PLEASE DON’T MAKE ME, PLEASE!”

We went to the clinic, and I lied and said this was my choice. She wouldn't let me bring my boyfriend, and I wish he was there. It didn't work the first time, so I had to go back the next day. I killed my baby on February 2, 2016, and I regret it. I mean, my life is good, I'm happy, and I'm still with my boyfriend, but I can't tell anyone. I can't talk to my parents because it's too emotional, and I don't think my boyfriend wants to hear about it anymore. I just want to tell someone that I'm in pain. This hurts; I'm grieving. This hurts me; I just want to scream it out at people I don't even know. I just want someone to know it hurts because it hurts so much to know I don't have my baby. I'm 17, and I've had two abortions. One at 12 weeks and one at 16. What kind of person am I? I hate myself.

Some days I make myself sick because I'm so disgusted with what I've done and other days I'm selfish enough to put it all behind me and try to have fun, but I just grieve and no one else does. My mum doesn't care that her grandchild is dead. I don't think my boyfriend cares that our baby is dead. I feel so alone with this grief. I don't think anyone but me cares, and that hurts so much. It's so isolating; I just feel alone in my grief and alone in my pain. Everyone else can feel sad for me or it may hurt them, but not like this. They don't know this pain, and I can't tell them this pain. I'm alone with it. Please, I just want to tell someone that I'm in pain. I don't want to be alone with it anymore.