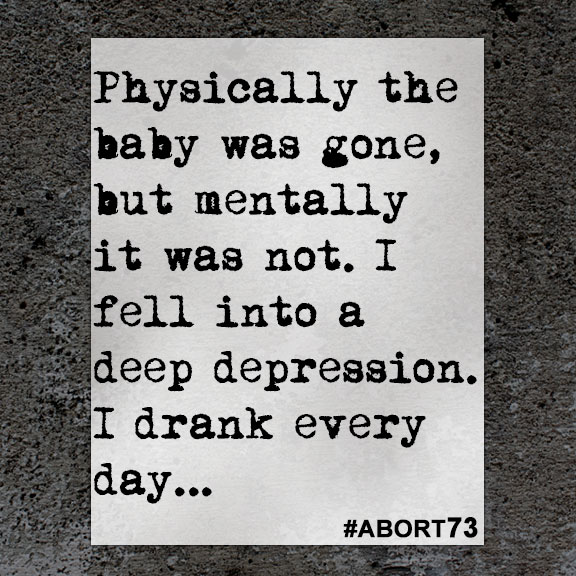 Physically the baby was gone, but mentally it was not. I fell into a deep depression. I drank every day...

It's kind of long story. It all started when I got raped last year by a person whom I knew very well. I decided not to tell my family because I felt that their asking questions and taking legal action was going to prolong the situation mentally while I just needed to forget everything. Luckily I was still HIV negative and not pregnant. Then in late April of this year, while still 18-years-old, I found out I was pregnant. My whole world collapsed. I had a lot to think about First, I'm still in school, doing my first year as a BCom student. Second, my sister was due to have a baby in May. Third, I'm still so young. Fourth, the person responsible for my pregnancy is married and couldn't bear to think of causing conflicts. Last, my baby would be a curse in other people's lives. Again, I couldn't tell my family; I was afraid of being judged. I talked to the guy. He said he would support any decision I made but I had already made it. I couldn't keep my baby. He gave me a month to rethink, but after the time given, my mind was set. He took care of the finances, and I made an appointment. The day came; I went there. Lying in that bed with male doctors poking you is the most uncomfortable feeling ever! They told me they had no sedation and I had to do the surgical procedure, so I had to feel and see everything happen. Worse was that I found out I was 15 weeks and 2 days. While the procedure went through, I fell into a numbness. Having a part of you withdrawn from your body is the biggest tragedy I’ve ever faced. I walked out of the building convinced that I left my baby there. Physically the baby was gone, but mentally it was not. I fell into a deep depression. I drank every day, everything I could get my hands on. Whenever I drank I had outbursts. I got too attached; I even named my baby. I used to find myself talking to him/her whenever I felt sick. “Baby, we need to go to school; can you please calm down?” One of those outbursts was on 27 June, my birthday. Apparently I was crying while drunk until I confessed to my mom about the rape and abortion. Family, friends and my boyfriend that I found, whom I dearly love, aren't happy with me due to my outbursts. I though my baby was the pain I needed to get over quickly, but I lied. Waking up alone, now that's pain.