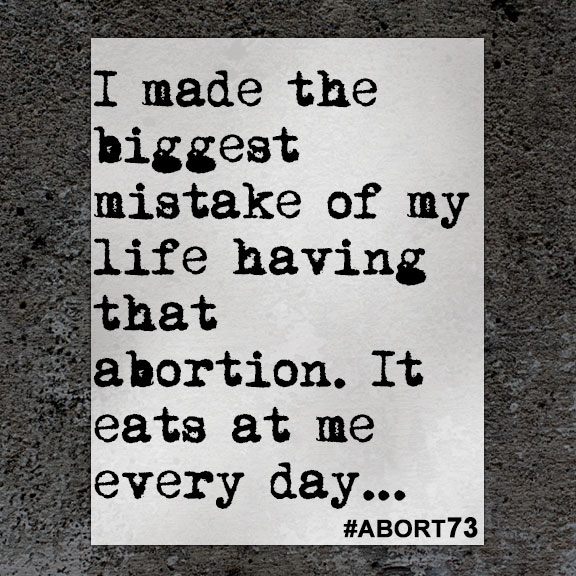 I made the biggest mistake of my life having that abortion. It eats at me every day...

I found out I was pregnant a month after moving in with my partner. I dreamt of that moment, wished on stars, prayed and thought about it often. When I told my partner, he freaked out!!! He immediately went online and started booking airline tickets to Ireland. I was devastated. He gave me an ultimatum: keep the baby and he would leave me, throw me to the street, and never speak to me again—our baby never knowing who he is. I had no visa at the time, so he threatened to go to the police and call immigration, OR I could have an abortion—with the promise that we could go back to being an amazing couple. He would put me on his visa, and we would get a new unit together.

I wanted that baby more than anything and I loved him, so either way I felt like I was losing!!!! I turned to my family, asking for help as I knew I couldn't do it on my own. I also turned to my best mate, and both said “no.” They wouldn't help me. I prayed for a miracle, I called charities, anyone that would help me. My pregnancy was high risk, and I had a painful, growing tumour on my uterus. I was paying out of pocket for each doctor visit. I was so scared!!!! I begged him to help me, but he was so adamant about me not having it. It got to the point where he was saying he didn’t care if the baby and I lived in a homeless shelter. He just couldn’t be a part of it. He would tell me he promised we would get through the abortion together, that he loved me and things would be good again. I begged GOD for help, but I felt nothing and heard nothing.

On December 3, I went through with the abortion. I felt like such a weak woman. Why couldn’t I just walk away from him and just believe the baby and I would be okay on our own? The next day after the abortion, he turned on me. He told me I tortured him for seven weeks for getting pregnant, and he was going to torture me back. I was bleeding everywhere, crying. I felt so betrayed, manipulated, and angry. I just went through that for him and here he was breaking up with me, throwing me to the street anyway. Ten days later he got drunk, and he and a friend assaulted me. He called the cops and told the cops I tried to kill him. Then he called immigration and said to deport me. I got put in the hospital, then arrested, and then thrown into immigration detention for 46 days after getting discharged from the hospital.

When I got out of detention, he broke up with me and wouldn’t let me home, so I couldn't get any of my things. I’ve been out for two weeks. He calls me a scumbag for having the abortion and blames me for ruining our relationship and for getting pregnant. I cry every day. I made the biggest mistake of my life having that abortion. It eats at me every day. I’d be four months pregnant right now. What have I done? I am sitting here so depressed, just in disbelief that the man that I love did this to me. I saw him on Valentines. He called me, and we met up and wound up having sex. I wanted to get pregnant at that moment. I know it might sound crazy, but I felt like it would have made up for what I did. I am homeless because of him. I’m jobless, I gave up my baby, and I lost him anyway. I am still facing criminal charges for the lies he told police. I can’t help but think if I hadn’t had the abortion, none of this would have happened. If I had FAITH and TRUST in Jesus Christ at that time, I would still be pregnant. It was the worst decision of my life, and I’m reminded of it every day.