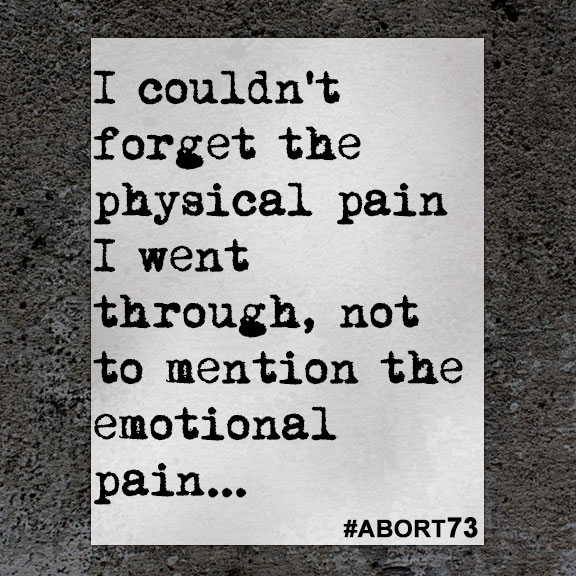 I couldn't forget the physical pain I went through, not to mention the emotional pain...

This happened about three years ago. I had met him a few months before, and he seemed like a perfect gentleman. Little did I know. I remember how the first time we did the deed he asked we make a pinky promise that we wouldn’t fall pregnant, not anytime soon. Little did I know that on that day, we actually made a baby. I missed my period, which confused me because I was on the pill. I guess the days I missed taking it led to me falling pregnant. I remember the doctor saying, “Congratulations you are pregnant.” I nearly dropped dead.

When I told my partner, he told me I should make up my mind before it was too late. I cried myself to sleep for three weeks. We finally agreed that abortion was the only option. On the 22nd of December, 2012, we went to the clinic. I was scared as ever. When the ultrasound was done, the nurse said I was seven weeks pregnant. I didn't even want to look because I was so scared I would change my mind. Five hours later, I was told I could go home. I couldn't forget the physical pain I went through, not to mention the emotional pain, but I promised myself I would not let it destroy me.

My relationship with my partner started getting rocky. We would fight almost every day. He ended up cheating, so we separated. During the break up, we would meet occasionally and whenever we met, we would do the deed. On the 22nd of December, 2014, (isn't it ironic) I fell pregnant again.

Today, on the 29th of January, 2016, I have a healthy 4-month old son who means the world to me. He is my everything. I decided to keep him after my ex tried to force me to get yet another abortion. Honestly, I don't regret keeping him. His name is Onkagile. it means “you have built me.”