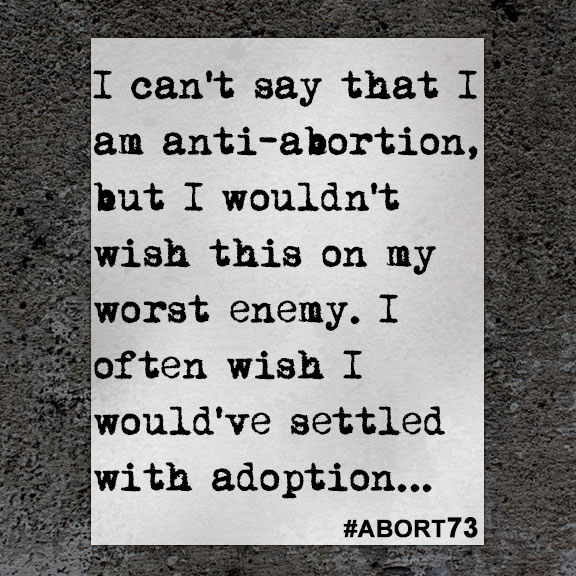 I can't say that I am anti-abortion, but I wouldn't wish this on my worst enemy. I often wish I would've settled with adoption...

I remember the exact time that I got pregnant, partially because I use a period tracker and keep track of when I’m sexually active. I really remember the day, because we were having unprotected sex, and gambling with our freedom as adults, but didn't plan on being so caught up in the moment. I went on over the next few weeks, pushing that night to the back of mind, and just praying my period would come. Within the next few weeks, I started feeling a sharp pain in my abdomen, near my left ovary, but thought it was minor premenstrual cramps.

I decided to Google what was the earliest I could take a pregnancy test. That night I bought a test and snuck it home in my purse, careful so my aunt wouldn't see. I drank so much water, that I barely got to sleep and took the test with diluted pee, which resulted in an inaccurate reading. What I thought was a relief, was really the calm before the storm. Later that week my boobs began to swell and hurt. I continued to feel the sharp pains and began feeling nauseous. I kept denying that I was pregnant based on the first results, until I was three days late for my period. I convinced myself that I had an ovarian cyst, and that was possibly why my period was late, but I took another test.

Four weeks passed, and on March 24th, I found out I was pregnant. I sat on the toilet and cried, then immediately sent a picture of the results to my boyfriend. I headed to class that day with mixed emotions, trying to keep it together, but I was falling apart inside. By the time I saw the doctor I was five weeks, and had done all the research I could do about abortions. My doctor scheduled me for another appointment and told me that I needed to make my decision swiftly, in order to get the correct procedure. I was so confused about what I should do. How was I going to take care of a baby at 25, when I didn't even have my own apartment and was a college student with a year left?

Before the fifth week of my pregnancy was ending, I had booked an appointment to terminate. In the days that followed I often cried and told just about everyone I considered close to me, hoping some words of encouragement would confirm why I should keep it. Everyone pretty much said the same thing, "Whatever decision you make, keep in mind that it’s your decision. Don't let anyone pressure you." I made a list, prayed and cried, trying to make a final decision. As the date of termination approached, I started to get more nervous. I had given my baby a name, falsely believing it would calm my nerves and take some of the guilt and pain away. I decided on naming the baby Bailee. Just typing the name brings me to tears.

The morning of my procedure, April 9th, I was emotionally on edge. I followed the doctor’s order to not eat after midnight, but tossed and turned, resulting in me looking like a zombie and emotional wreck when I arrived to my appointment. Every woman in the waiting room was silent and had less than pleasant looks on their faces. Although my father was there to support me, I still felt so alone as I filled out the medical chart and waited for my name to be called. Words fell on deaf ears, and we sat in silence most of the time. It wasn't until I had to enter the bathroom to take my clothes off that I broke down. Before I knew it, I was lying on the procedure table, and the doctor was trying to ease my nerves. The medicine entered my body and the lsat thing I remember thinking is that I was so sorry for what I was about to do. When I got back to my hotel room, my mother was gone, so I let out the loudest cry. The procedure was done within 15 minutes, and although I was in slight pain, it didn't compare to the emptiness I felt inside.

I was six weeks pregnant the day of my termination, which just so happened to be a month before my 26th birthday. Over that month, I often felt angry, guilty, regretful, and completely empty. Days after the abortion, I wished I had waited a little longer, but I knew it would make my decision even harder. I felt like the decision wasn't mine. While my family was supportive, they all leaned towards me terminating, because they want me to finish school. My boyfriend was unsupportive, and we eventually broke up. I have days when I am okay with letting the baby go, because I wouldn't want my child to grow up in a dysfunctional home. I would be 13 weeks pregnant at the end of this week. I can't say that I am anti-abortion, but I wouldn't wish this on my worst enemy. I often wish I would've settled with adoption, or just kept my baby for myself and toughed it out. I pray no young woman has to go through this. Use protection or practice abstinence. Wait until marriage if you have too.