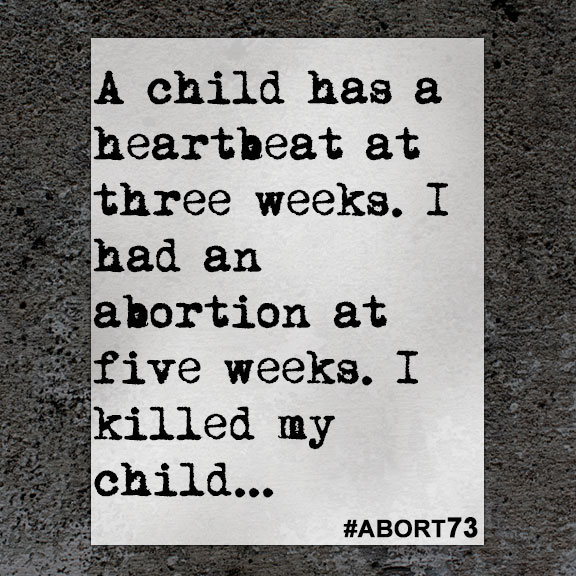 A child has a heartbeat at three weeks. I had an abortion at five weeks. I killed my child...

I was in a tough situation. My boyfriend of three years had just told me that he would like to have sex. I told him that he was crazy, but then I let the thought seep into my mind and said yes. I got pregnant. When I found out this information, I was happy. Although they are a lot of work, I love children. When I told my boyfriend, he turned on me. He told me that I had to get an abortion, or he would break up with me. So I scheduled the abortion. Because I was only a couple weeks in, I could take the pill. When the pill was past my mouth, I knew that I had made a HUGE mistake. I needed to leave and just never come back. I went home and cried the entire time. My boyfriend came back, but only because I had gotten an abortion. If you are a teen who is pregnant, DO IT BY YOURSELF!! You don’t need to have a man in your life. My boyfriend and I are back together, but I feel like there's a disconnect. I think that I should have kept my child. I wish for her every day and every night. A child has a heartbeat at three weeks. I had an abortion at five weeks. I killed my child.