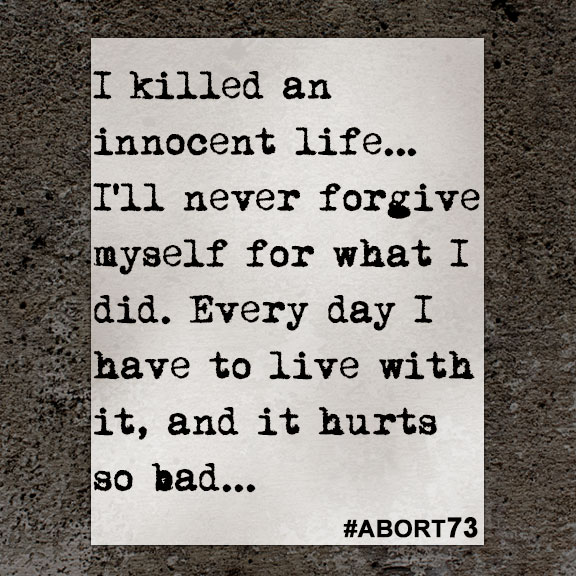 I killed an innocent life... I’ll never forgive myself for what I did. Every day I have to live with it, and it hurts so bad...

I had been with my ex for a few weeks before I found out I was pregnant. I didn’t know what to do when I found out. My ex said he’d be there for me no matter what I did, which was a lie. We talked about it, I went to the clinic, but I just couldn’t do it. I wanted more thinking time, so I made another appointment. I went the second time and put it off again. The third time I went through with it. As soon as I took that tablet, I knew that I shouldn’t have done it.

I got really drunk and cried to my mum. I never told her I was pregnant. Maybe if I had, this wouldn’t have happened. She called me a murderer and did not speak to me for months. I had to go back again for the next dose of tablets. I went home about 1:00; nothing happened until 5:00. I went to sleep and woke up in pain. It fell out, I looked in the toilet, and that image I will never forget. I regret it every day of my life. I wanted to kill myself. My ex-boyfriend wasn’t as supportive as I thought he was going be. I ended up with depression. I killed an innocent life because of my mistakes. I’ll never forgive myself for what I did. Every day I have to live with it, and it hurts so bad! But the story doesn’t stop there.

Six months later, I found out I was pregnant again. Guess I never learned my lesson. It was with a different guy. I told him, and he begged me not to get rid of it. I thought and thought about it, knowing what harm it did to me last time and how deeply I’d regret it. I decided to make an appointment to the clinic once again. How I walked into that place again, I’ll never know. I was embarrassed, in case they remembered me, but I don’t think they did. So I went, and I did the same thing again. I re-booked the appointment, went back a week later, and took the pill again. I cant believe I did it the second time. Why, why, why!???? I went to my friends and broke down. This time I wasn’t telling my mum. She’d never speak to me again.

I went back the next day; nothing happened again until 5:00. I was bleeding terribly this time. I did not look down. I didn’t feel enough this time. For two days I just felt numb, then I started to break down. I was crying so much I was gasping for breath. Another innocent life had been taken! That's two of my babies gone. I’m such a bad person. I was just scared and confused and just wanted an easy way out, which wasn’t easy. I advise anyone not to do it! Abortion should be illegal!!