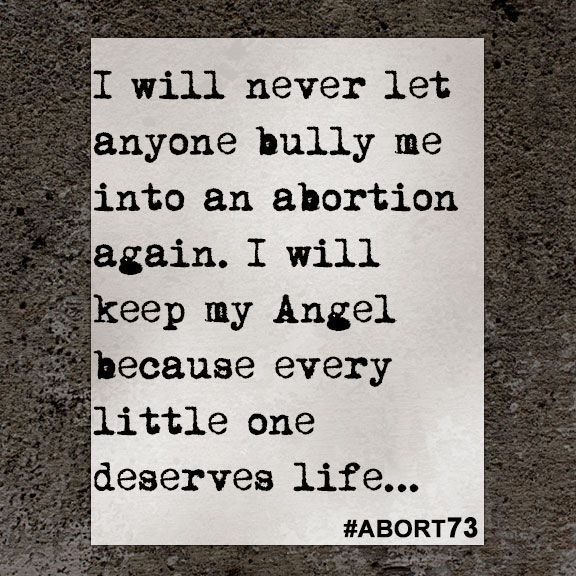 I will never let anyone bully me into an abortion again. I will keep my Angel because every little one deserves life...

Every day is a battle. It’s been five years since the first abortion and four since the second. I fell in love with my two angels straight away, but the guy I was with forced me straight away. He said he would leave me, said my family would leave me. I’d have nothing. I wasn't mentally abused until it was over with both times.

I remember every second of my hell—the basement room, the basement procedures. It was like something out of a horror film, the horrible feeling of consciousness slipping away. The waking up empty both times, knowing my angels were gone. The going on the train still half under anesthetic, alone, in pain, and scared. The physical pain lasted weeks; the mental pain lasted years—to this day. That was the first time.

The second time, I had the tablet first. I came home and threw up at the thought of what I was going to go through again. The pain came fast— bleeding heavily, clots, and after 24 hours, the worst pain ever. Something ingrained in my brain for life—seeing my angel in a clot, this tiny little baby not fully formed. Blood everywhere. I could have died in that moment and not cared. To top it off, I had to go back to that basement. The pill hadn't worked properly, and I had to go through the procedure again.

I get nightmares every single night, reliving it every single night. I lost two angels and will never get to hold them, love them. All of it is ingrained in me for life. I will never forgive my self. How do you? Mentally battered into it or not, I should have and could have done more. I will always hate myself, to my dying day. I will never let anyone bully me into an abortion again. I will keep my Angel because every little one deserves life. My two angels never got to make memories, but I will always keep them ALIVE in my heart.