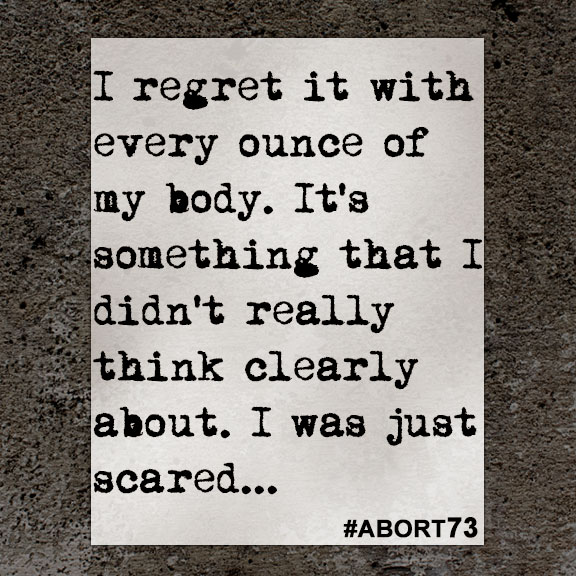 I regret it with every ounce of my body. It's something that I didn't really think clearly about. I was just scared...

I found out I was pregnant at 7 weeks. The minute I saw the test was positive, I was sure about getting an abortion. Although I do love the person I'm with, I didn't want a child so young because I did not want to end up like my mother. My boyfriend didn't want me to have an abortion. Neither did my family. One day I just decided to keep the baby and told everyone. They sounded so happy, but I didn't understand why I wasn't. The day for my appointment to get the abortion pill came. I went. No one knew. I did what I had to do there and left. The next day I was in the worst pain ever. I got rushed to the hospital. My boyfriend and my family were there with me. The doctors told them I had a miscarriage although that wasn't what happened. I didn't say a word. Tears started dropping down my face; I've never been so sad before. I thought it was what I wanted. To this day, no one knows. Not even my boyfriend. He was so broken about it and still is. I hate lying, and I hate being the reason why he's so down on some days, thinking I lost the baby when the truth is I killed it. It's been breaking me. I sit and think about what if I had the baby. I would have been so happy. I regret it with every ounce of my body. It's something that I didn't really think clearly about. I was just scared, especially being so young. I was scared of struggling, of having to grow up faster, and so many other things. The picture of the ultrasound just keeps replaying in my head. Knowing there was a small life in me that I gave up KILLS ME. I want to be at peace with myself, I want to forgive myself, but I can't.