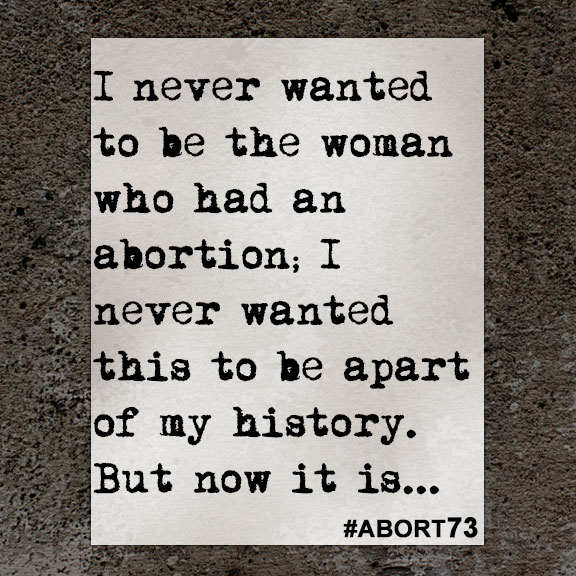 I'm not sure how to begin telling my story. It's odd that I find myself on this site. I was always careful and was proud that I had defied all the statistics that were supposed to be against me. I went through my teens and 20s without a single pregnancy scare. Last year my longterm boyfriend and I broke up, and I began seeing someone else. One thing led to another, and I became pregnant. I was so scared and anxious. I knew my family would be supportive but disappointed if I ever told them I was pregnant. I would have been pregnant and single. I decided to have an abortion because it was the only option I had. I know some people who read this will disagree, but at the time I couldn't accept hearing any other opinions. Back then the idea of having a baby would have threatened my family's perception of me. I was a grad school graduate, a career-oriented young woman who owned her own home and drove nice cars. My family doesn't look too kindly on having a baby outside of marriage. So if they found out that I was pregnant AND by someone "random," the doom would set in. Plus I didn't really know where my ex and I stood. We had talked of rekindling the relationship and moving forward. So when I found out I was pregnant after Thanksgiving, I was in shock. I cried almost every day for awhile. I thought, "how could this have happened to me?" I tried to shove the thoughts out of my mind and redirect my attention elsewhere, to just keep busy. I had an emotional episode when the doctor at asked me if I wanted to see the ultrasound. I kept saying I was sorry. At that moment I remember thinking I was a horrible person. A year later, I still imagine this pregnancy and a baby. What would I have named it? How awesome would it be to be pregnant? What cool ideas I could have done for their room? I could have taken pictures of the first everything. I imagined what my baby would look like, how cute it would be to be pregnant, and what it would be like delivering my first child . My best friend ended up getting pregnant around the same time as me, and sometimes it hurts when I see how happy she is with her baby. I think, "that could have been me." Last year I made a mistake; I should have been married; I should have been patient; I should have been less impulsive; I should have been a lot of things. I never wanted to be the woman who had an abortion; I never wanted this to be apart of my history. But now it is. I pray God can forgive me and bless me in the future. My thoughts haunt me.