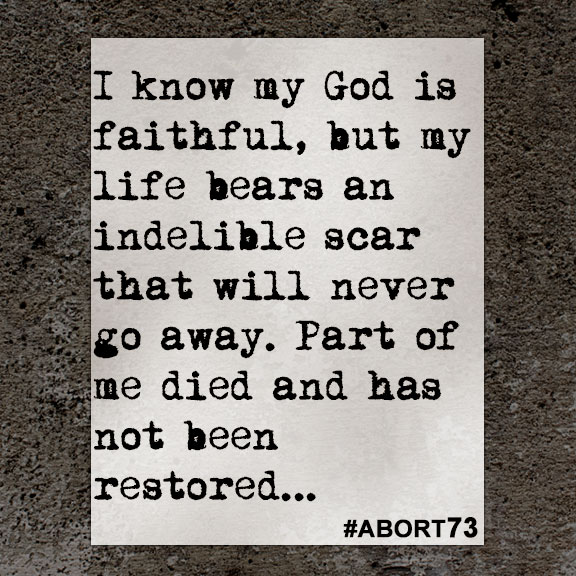 I know my God is faithful, but my life bears an indelible scar that will never go away. Part of me died and has not been restored...

My name is Danielle, and I am the mother of 10 children; 2 are in college, one I miscarried and the other seven all had their lives ripped from them through abortion. Growing up, I had a very painful, abusive home. I longed for positive attention from men. My dad, broken emotionally, often told me that "because I was a whore, I would be pregnant by the time I was 14.” Oh, the power of words. I met a young man at 14 who would become my husband. Coming from his own twisted, abusive upbringing, we clung to each other even in the midst of our toxic relationship.

My first pregnancy occurred when I was 15. I was shocked and so sick. The only place I knew to turn was Planned Parenthood. I was told that "it" was just a lump of cells and would be very easy to remove. I would have to pay $300 and show up to my appointment, but then I could go back to living life the way I always did. When I finally told my mom, she told me that she would take me herself because I was much too young to have a child, and she was dating someone and did not want any extra drama. My boyfriend adamantly agreed. Of course, ultimately, the chose rested with me. I was embarrassed and did not know what else to do. I will never forget that day; I was terrified, and there was a young woman with a bloody sign outside the clinic gently talking to women as they walked through the doors. I purposely averted my eyes as I was resolute about what I was doing. Yet somewhere deep inside, my heart was breaking before I ever reached the door. I willingly went through the process and when I awoke, a major piece of me died along with my baby. I slept for the rest of the day, broken, ashamed, and guilty.

I was told to use birth control pills and condoms moving forward. Selfishly, I did neither moving forward. A strange thing happened to me as well; after taking the life of my first precious child, I became hyper-vigilant about the abortion rights of young women. After all, it was not that big of a deal. Students in high school would ask me about where to go, and I would direct them. In directing them, I believe I was denying the deepest pain within me about what I deeply knew was morally wrong. I had six more abortions after that, and each one became increasingly easier. I fell into a depressive abyss with each one but didn’t think it was any big deal.

Deciding to join the military with my boyfriend, we got married at 19, so we could ensure that we were stationed together. A year later, almost to the date, I gave birth to my daughter. Now it is difficult to describe the depths of despair and darkness that I descended into holding this beautiful little girl in my arms. The mask was ripped off. The lies exposed. I was a murderer. I had done the unthinkable, all under the shroud of darkness and I hated myself. My denial was confronted so absolutely; I was dead emotionally. Therefore, I did not have much to give to my precious little one or any one else. My husband became the enemy, because he had not protected any of his seven previous little ones.

Twenty months later, I gave birth to my second child, and the despair worsened. I was the walking dead. I was the epitome of shame and hopelessness. I slept most of my hours away and did what I could to provide my two living children with a good mom. After all, that was the least I could do.

A few years later, I heard about a post-abortive support group that was based on a Bible study. I decided that it was the right thing to do, and it was the beginning of the healing process for this very broken, depressed, suffering heart. I’m not sure how I found the strength to go each week, but I kept going back. One week we talked of forgiveness and during the prep time God in His sweet grace and mercy revealed the following vision to me while I was in prayer:

It was the most beautiful green that I had ever seen, hills rolling as if playing against the blue sky. And there I was standing, staring. Coming towards me was the most beautiful group of children, seven in all with beautifully distinctive features. They smiled and laughed while being led by a loving man. As I joined this lovely group we sat down in a circle with me in the middle. One my one, starting with the oldest, each child handed me a beautiful yellow rose, eyes full of love and said, "I forgive you.” I then turned to the next and each child did the same thing. Finally, the youngest little girl did the same, and they all got up, took hands, and walked away. The last little one turned towards me with tears in her eyes and stared as they walked away. Even as I write this, my heart breaks and tears fall without stopping.

I've walked this road of healing and regret for more than 25 years now and have experienced tremendous grace and forgiveness from Jesus Christ. I've even lead similar Bible studies to help other women walk the long road to recovery. I do believe that God really does use all things for our good if we let Him (Romans 8:28), and I only pray and hope that my story will keep one woman from living this same life of suffering that I willingly chose. If only I had known better; ignorance is not bliss.

I know my God is faithful, but my life bears an indelible scar that will never go away. Part of me died and has not been restored. I have struggled tremendously to live a life of normalcy in spite of what I have done. My relationship with my husband has ebbed and flowed, but we both know that our decisions have created tremendous chasms between us. We continue to work at moving past them. If I could change one thing in my life, I would have kept my first child and given him up for adoption. But as they say, hindsight is twenty-twenty.

My back now has 10 beautiful tattooed butterflies on it to signify the beauty of each of my children's lives. Until I see them again in heaven, I mourn my choices, rejoicing that I have been forgiven.

One side note. I prayed for years that my living children would not find out about the shameful things that I had done. I even threw my books and workbooks away to ensure this never happened (what a loss that was!). When my daughter was 16, I felt the pressing need to reveal the truth to her and felt assured that the time was right. Her heart broke that day as well as she thought about the possibility of her living her life with older siblings. She cried. And through the years, we have talked about it. She has used my story many times to share the horrible truth about abortion with others. My son learned the truth as well.

From a heart broken, and in the process of being redeemed, wrought by the shadows of her own doing. Protect your life and the life of your little one; do not abort. It is a short term solution (if you can call it that) to a long term, heart breaking, life altering problem. Heed my own mistakes.