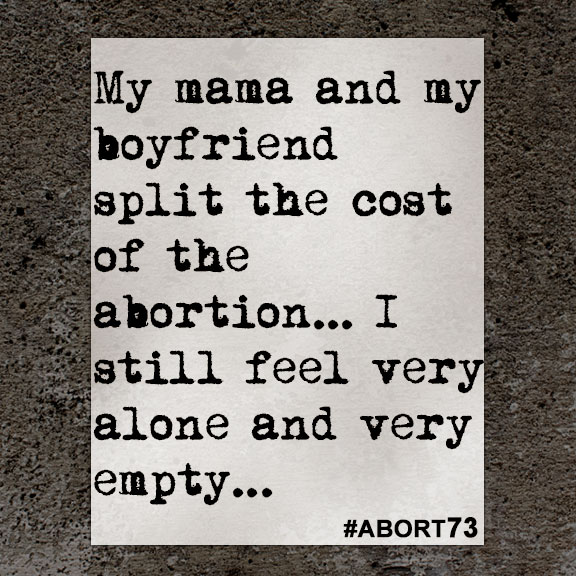 My mama and my boyfriend split the cost of the abortion... I still feel very alone and very empty...

In the spring of 2014, I was a freshman in college that spent way too much time partying and not enough time in class. I met the man that would change my life at the end of the spring semester. We spent three months engulfed in each other. We literally spent all day, every day together. One morning I woke up (in his bed) and felt the vomit approaching my esophagus. I jumped up and ran to the bathroom. He followed and asked me if I was okay. I said yes, and we thought nothing more of it. Then it dawned on me: it was April 11, 2014. My period ALWAYS ran on the 9th of every month. Never a day early or late. I immediately left his apartment and went to mine (we lived down the hall from one another). I was honestly too nervous to tell him anything until I knew for sure.

I went to Walmart and bought three tests. When I arrived back at my apartment, I locked myself in my bathroom and sat in there alone for quite some time. I had taken two of the three tests, and they both showed the undeniable: a set of parallel lines. I honestly don't remember what I felt. It wasn't sadness, and it wasn't happiness. It was still, and I was numb. I put the test in my pocket and walked to my boyfriend's apartment. When I got there, I asked him to join me in his room because I needed to tell him something. He followed me in, and I was silent. After about three minutes of him repeating, "what is it?" I simply placed the test in his hand. He shook his head, then he said to go to the doctor just to be sure. So I made the appointment. I went into the doctor’s office by myself the next day, and she confirmed that I was indeed pregnant and six weeks along. I left the doctor's office feeling very sure that in eight months or so I would be a MOMMY!!! ߘŠ

Very scared and trembling, I called my mama. I was crying as soon as I heard her voice say, "hello." I hated disappointing her, and I knew I was going to do just that. My mama had my older sister and I both by the time she was 21. She had always taught us to protect ourselves because we watched her struggle to raise us. She sent me to college to get a degree, not a baby. I finally broke through my sobs and told her that I was pregnant. She asked what my boyfriend thought and I said he hadn't said much (although I knew he was not ready to be a daddy). My mom was the first person to encourage the abortion. "It'll be hard, baby girl, but it is what’s best for you.” Those were her words. I went to my boyfriend’s and told him my mom wanted me to get an abortion, but I wanted to keep our baby. He said, "I think we should get rid of it.”

From the moment I found out that I was pregnant, the only person that approved of it was ME! A week later, we arrived at our appointment at Planned Parenthood. I was nervous and VERY sick all morning. That day was a blur. I went in with a baby and left with a pill running through my bloodstream that would murder my baby. On that day, I named myself, my mama, and my boyfriend a MURDERER. My mama and my boyfriend split the cost of the abortion, and I was on my way back to my apartment feeling very alone and very empty. And still to this day, as I lay in bed on this chilly October night, I still feel very alone and very empty.

A year and a half has passed and my boyfriend and I are still together. He is sound asleep beside me right now, with not a worry in the world—as I lay here weeping, as I do a lot of nights. We both regret the decision, but it definitely weighs on my heart heavier than his. I killed my baby, and I will forever regret it. I'll be so happy and complete if God decides I'm worthy of such a gift again since I betrayed him the first time. My advice to anyone going through a similar situation: DONT LISTEN TO THEM! Have your baby, and love your baby. Give your baby unconditional love. God bless.