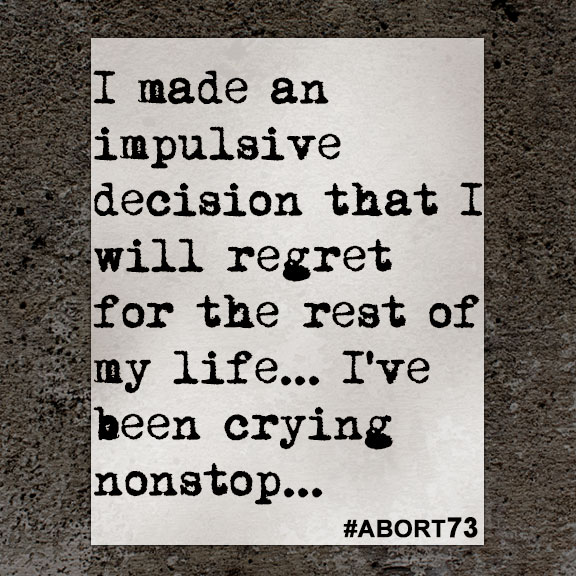 I made an impulsive decision that I will regret for the rest of my life... I've been crying nonstop...

I was having "casual" sex with someone I liked SO much. No, I didn’t plan to get pregnant. I just thought he would like me as much as I liked him, and I was going to show that by having sex with him. That was my first mistake, but that’s another story. When I found out I was pregnant, I was scared. I actually found out really early, and my doctor told me I wasn't going to be able to hold it because I was showing signs of an early miscarriage. But sometimes miracles happen! I waited every day for about a week and a half to miscarry, but nothing happened. At least, I didn’t think so. So I went back to the doctor that Tuesday, and I was still pregnant. I was scared; I’m in college, I’m an athlete, and I’m only 19. I have so much I want to do before I have a baby. I also wanted to be with the father of my child, be financially stable, and be a college graduate. But things didn’t work out the way I planned, clearly.

I was so against abortion until I was put in that situation, but I still couldn’t think about killing my baby. I didn’t want a baby right now, which I should've thought about before I had sex. I just kept thinking about how my life was going to be ruined now, all because I wanted someone to like me. I made plans to abort the baby. I went to the clinic and talked with the doctor about the prices and procedures, but I changed my mind. I couldn't do it. I didn’t tell anyone I changed my mind about aborting the baby because I wanted to tell the dad first. I never had the opportunity. He wasn’t texting me back. We see each other every day at school, and he would act like I was completely invisible. I was so upset because this is exactly what I didn’t want to happen. I turned to my friends and he finally talked to me, but it was nothing I wanted to hear. He basically said he didn’t want anything to do with me or the baby. I was basically on my own. He used a lot of other harsh words, but those hit me the hardest. I couldn't do this by myself; I couldn't let my child go without his/her father.

I know what it’s like to not have a parent active in your life, and I refused to have the same for my baby. I just wanted the best for him, and I thought the best was for him/her not to come into this world. I made an impulsive decision that I will regret for the rest of my life. I just had to share my story because I want anyone that's reading this to know that YOU CAN DO IT WITHOUT A MAN. Don't ever think you can’t. If he doesn’t want to be there, guess what? He is going to miss out. Just don’t make impulsive decisions. I've been crying nonstop. Everything makes me think of how precious my baby would've been. I don’t even know who I am any more. Please, Please, Please make sure you think it though because once its done, you can’t rewind time and take it back—no matter how much you want to.