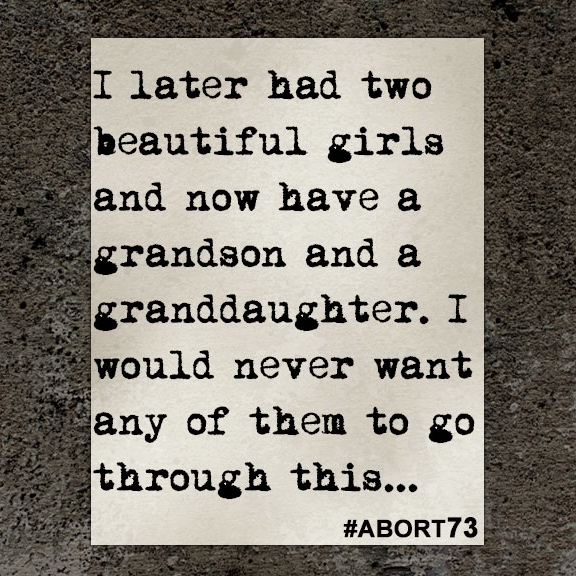 I later had two beautiful girls and now have a grandson and a granddaughter. I would never want any of them to go through this...

Abortion Story: The Dalles, OR

Forty-one years ago I found out I was pregnant. I was 17, starting my senior year in high school, a cheerleader, basketball player, and one of the top students in my class. My parents told me if I ever got pregnant, they would send me to an unwed mothers home. They never considered I could get an abortion; it never occurred to them that I could do such a thing without them knowing. So my basketball coach went along with my story that I was going to a basketball camp in Portland for the weekend. It never occurred to them that I didn't have to pay for it. My coach lied to them with me, saying I was chosen for a scholarship. Of course they believed that!

My girlfriend’s boyfriend was going to college in Portland, so he had an apartment we could stay at for the weekend. On Friday, October 21st, we went to our consultation at Planned Parenthood’s abortion clinic, called the Lovejoy Clinic. The name alone makes me want to vomit. We were never counseled about options for the pregnancy. Instead, we were told how the procedure was done and that it cost $157. My boyfriend took me to the procedure on Saturday morning. I checked in at the front office, they sent me to a room to take off my shoes, socks, underwear and pants, and I put on a hospital gown. There were about 15 girls there that morning. Someone told me they were there to have their period sucked out so they didn't have it for their vacation. That shocked me, since I didn't know that was possible.

I was taken into a room where they put a piece of seaweed type material in my cervix that would dilate it for the procedure. After a while, maybe an hour, they took me in to "vacuum" out the tissue. It hurt, a lot, but I was tough and this was just tissue. Even then, I knew it was more than that, yet no one I talked to ever said anything. I was wheeled into recovery, bleeding a lot, but that was normal. A lot of the girls had someone, family or a boyfriend, sitting with them, but because we didn't know that you could have anyone, I was alone. I tried not to cry, but the tears leaked out of the outside of my eyes. A lady came and sat with me and tried to comfort me. A few hours later, I was escorted out the back door! That really stuck with me! It’s like they were ashamed after all the niceness they seemed to be using.

I stayed that night at my girlfriend's boyfriends apartment again—in pain and feeling so afraid. My boyfriend took me back to our school, two hours away from Portland, where I called my parents from the pay phone at the school to come get me after the "basketball camp.” I told my mom I had started my period while there and the cramps were really bad. Later that Sunday night, I was doubling over from the pain, vomiting, and scared. My parents were scared and nearly called an ambulance. Finally, I passed a large chunk of tissue, the size of a tennis ball, and then nearly passed out. We lived so far from a hospital that we would never call an ambulance unless it was a matter of life or death. It very well could have been, but I made it.

I later had two beautiful girls and now have a grandson and a granddaughter. I would never want any of them to go through this. I truly believe that Planned Parenthood is ONLY in the business of abortions. I learned my lesson, but a classmate of mine had five abortions during high school thanks to “Planned Parenthood.” Really, they teach birth control? Really?!