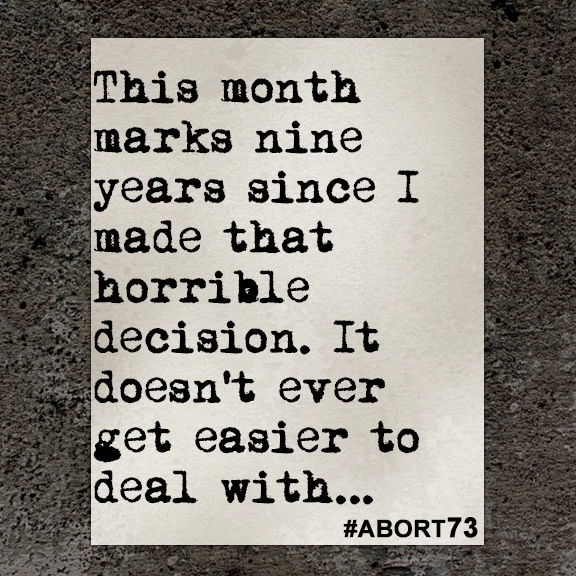 This month marks nine years since I made that horrible decision. It doesn't ever get easier to deal with...

I was 17 when I missed my period. I didn't think anything of it, but we decided to go get a couple of pregnancy tests to take. In barely anytime at all, those two blue lines popped up. That was the scariest moment in my life. I started hyperventilating and crying uncontrollably. We had just started our senior year of high school and just lost one of our best friends in an accident. I was terrified of what people would think of me, what my family would think of me, and what my church members would gossip and say. I felt ashamed for being pregnant.

I made an appointment with Planned Parenthood the next day. We both skipped school to go to my appointment. They did an ultrasound, and I found out I was six-weeks pregnant. They gave me an ultrasound picture, but since I said I wanted an abortion, I did not want to listen to the heartbeat. I needed parental permission since I was only 17, but I was scared of telling my parents. I planned on going through a lawyer that Planned Parenthood provides to get a judicial bypass—so I could get the procedure done. I went home and thought about this. At this point, my boyfriend had already told his mom. She was so excited and she really had me to where I had wanted to keep the baby. I changed my mind. With her help, I could do this. I did make stupid choices, and I drank and smoked before I made the decision to keep the baby.

My best friend’s mom supported me like a second mom and was there for me through the whole thing. Then came the point when I had to tell my mom. I woke her up out of a dead sleep—crying while I told her. I told her that I was keeping the baby. She told me she knew it. Then she proceeded to tell me that she and my dad got pregnant before they were married, and she was scared to death of what her parents would think— since they freaked out when her best friend, who was like their daughter, got pregnant around the same time. My mom got an abortion at 18. With my mom telling me this, I thought maybe I wouldn't be a bad person if I went ahead and got the procedure done. So I called and made an appointment. I was 12 weeks when I got my abortion. It was the last week that Planned Parenthood would do one. They warned me that this would cause severe tissue damage to my uterus and may cause me to have difficulty getting pregnant in the future with the possibility of never being able to get pregnant again. I did it anyway.

I can still remember everything so vividly, the sounds, the smells, everything. I didn't want to do it. There isn't a day that goes by that I don't regret and think about that baby. I got ridiculed at school by girls who were pregnant and kept their babies. I started using drugs and drinking a lot, to just make the pain go away. It is really hard to be around kids that are the age my baby would have been. I always think of the what if's. The people at Planned Parenthood were right; I would have difficulty getting pregnant. I have had two miscarriages since then. Sometimes I think that is what I deserve for taking that baby’s life. It kills me every day. This month marks nine years since I made that horrible decision. It doesn't ever get easier to deal with, and I always feel numb. When someone asks me about it and they want to know if it hurt, because they are thinking about doing it, I tell them that it is the number one biggest mistake I have ever made in my life. I regret it every day. I don't ever want someone to feel the pain I feel when I think about that day. I ask for forgiveness every day from God and from that baby. I know they do forgive me because they are in eternal life. I just hope that one day I can forgive myself for what I did.