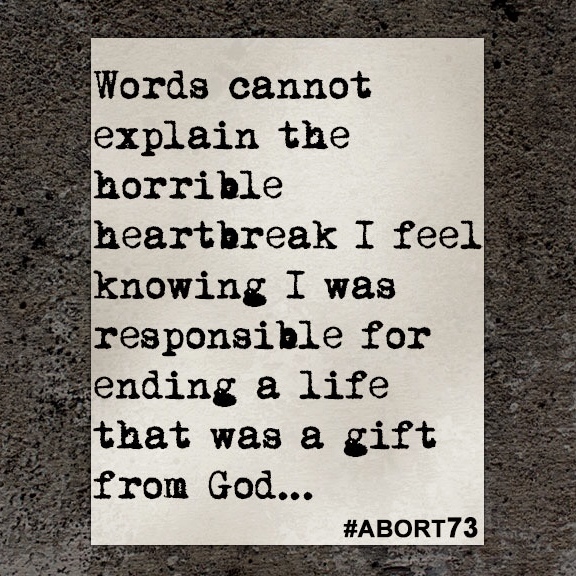 Words cannot explain the horrible heartbreak I feel knowing I was responsible for ending a life that was a gift from God...

No one knows this about me. I told my husband before we married, and thank God, he still loved me. We've been married for 28 years. Long ago in college, before we knew much about depression and genetic links, I was a 20-year-old student who spent too much time partying. Long story short, I got pregnant. I dumped the boyfriend and got a "menstrual extraction,” which was code for "abortion." It was being used by a lot of college girls as birth control, and a friend told me about it. It was performed at the university hospital. I'll never forget the doctor saying, "Yes, you were definitely pregnant." Those words haunt me still today.

Fast forward ten years and I am the proud mama of a beautiful baby boy—the love of my life. We were such a happy family, except for the pain of living with a long-ago-buried secret. Only rarely would I allow that memory to surface. Holding my baby in my arms, I realized the seriousness of what I'd done in college. Then came the heartache of not being able to have another baby, three miscarriages, and disappointment. Finally, we were blessed with the birth of our daughter, followed soon by another son. Our family was complete. My cup runneth over.

Severe postpartum depression got me started taking an antidepressant, and my eyes were opened for the first time in my adult life. I realized that I'd been battling depression since my teen years, a serotonin imbalance inherited on my Dad's side. Finally, I looked into the abyss and confronted my memories of my abortion. I was so ashamed, especially when God had continued to bless me with three children. How could I have done such a horrible thing? I'd been haunted by the memory for so long and had buried it so deep. I asked for God's forgiveness and promised I would be a good mother and raise my children to know Him. Words cannot explain the horrible heartbreak I feel knowing I was responsible for ending a life that was a gift from God. I can only be thankful for His grace and forgiveness. That's the only way I can live with myself. Even today, knowing I'm forgiven, it remains such a horrible thing.