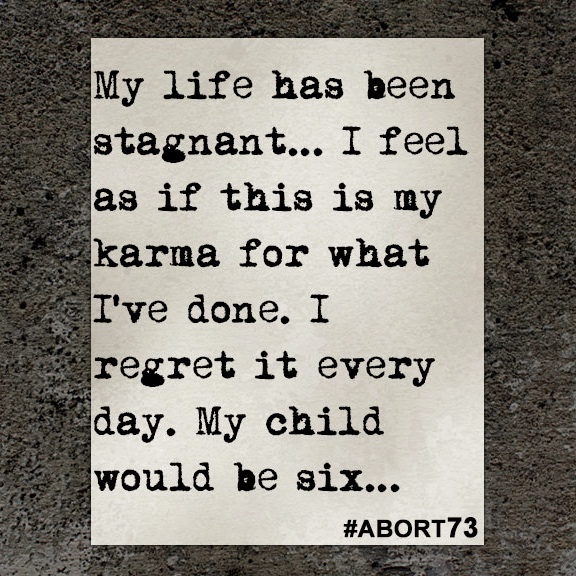 My life has been stagnant... I feel as if this is my karma for what I've done. I regret it every day. My child would be six...

I was with a guy for a few years. I was 22 when I found out I was pregnant; he was 30. I had a decent job, my own apartment and was mature and responsible. He was working a good job and had his own place as well. I found out I was pregnant on June 13, 2008. It was a Friday. My world stopped, and I was scared. I didn't believe in abortion and knew instantly I was keeping the baby. I thought the father would be happy. I was so wrong. I told him, and immediately he said to get rid of it. I stood up to him and told him no. We went back and forth for a week or two. Finally he said, “If you keep this kid I'm not having anything to do with it. I'm out of your life, but if I do decide to stay around, I'm taking full custody.” I was scared. I grew up fatherless and saw my sister battle her children's father for custody. I believed him and gave in; I had the abortion. It was my sister’s birthday. I will never forget. I remember the protesters, the sonogram, and hearing the heartbeat. I cried and cried. I've suffered in silence. My family is religious and would never support that. I always told the father he would dump me and have a baby with someone else, and that's what happened. I recently saw him, and he has a daughter now. My life has been stagnant—filled with lost love and heartbreak. I feel as if this is my karma for what I've done. I regret it every day. My child would be six. God forgive me for what I've done.