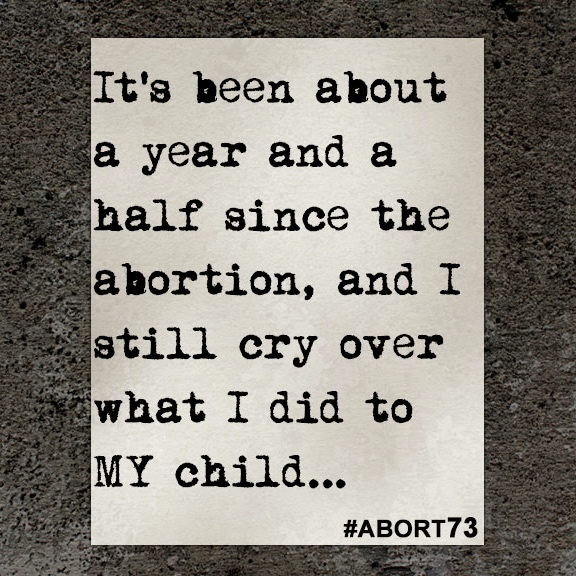 It's been about a year and a half since the abortion, and I still cry over what I did to MY child...

At 33-years-old, I started seeing a guy. I thought I liked him, so I decided to get on the pill so I could sleep with him without consequences. The pharmacist told me that once I started the pill, I would have to use a secondary method of contraception during the first week I took the pill. I did just that! When I was late with my period, I took a pregnancy test. It came out positive. I made an appointment with the Ob-Gyn, and they confirmed it. Immediately, I wanted to get rid of it. I’ve only known the father for about a month. I really didn't even know who he was, so how could I have a child with a stranger? I decided to tell the father about my pregnancy. He was very supportive and wanted to be there for me and the baby even though we weren't boyfriend and girlfriend. The father started being really needy, which only pushed me away. He was already talking about getting joint custody and having the baby every other weekend. I felt overwhelmed. I also had some health issues going on at the same time, which made me feel helpless. I would cry every day because I didn't imagine being pregnant like this. I thought I would be married first. The nurse who was supposed to call me about my condition didn't get a hold of me until I was about seven weeks. This made things a lot harder. I'll admit I never felt love for the baby, but I didn't want anything bad to happen to it. The nurse told me before I got an abortion that I should talk with a psychiatrist over the phone. The psychiatrist told me it was clear what I had to do. Besides, I should consider the fact I might have to pay child support in the future if I made more money than the father. My Ob-Gyn, made me go to my first prenatal appointment where I actually heard the baby's heartbeat and printed pictures of it. During my second phone appointment with the psychiatrist, she reiterated everything she had already told me. I got the abortion at eight weeks. I told the baby's father that I had lost the baby.

The abortion was the WORST experience of my life. The nurse that helped the doctor was rude to me and pressed the ultrasound machine so hard on my stomach. The whole procedure felt like my intestines were being ripped out. I felt relieved once I got it, but a few weeks later I felt like a murderer—especially since I heard the baby's heartbeat and started buying baby stuff. Now, I've developed R.A. and I don't think I'll be ever be able to get pregnant without taking pain medication for my condition. There's a risk that if I do get pregnant and take medicine, the baby will develop a cleft palate, have problems with its spine, or be blind. I’ve been trying to get pregnant again, now that I have a boyfriend I care about but haven't been able to. Perhaps this is my punishment from God for rejecting the blessing he had sent me. It's been about a year and a half since the abortion, and I still cry over what I did to MY child. I have asked God and the baby for forgiveness, but I don't think I will be able to forgive myself. I hope if I do get pregnant in the future, it helps me alleviate the horrible guilt feeling I have inside. I used to drink to forget, but I was only hurting myself even more. I really wish I wouldn't have told the father. Otherwise, I probably would have kept my baby.