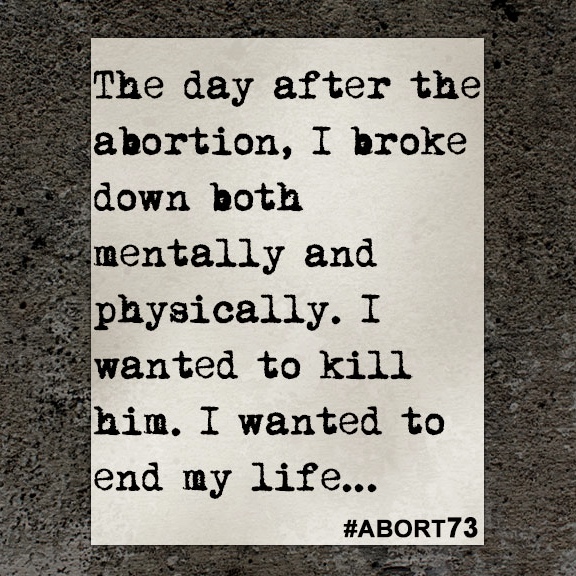 The day after the abortion, I broke down both mentally and physically. I wanted to kill him. I wanted to end my life...

I was in a relationship with a man who had a child with a different mother but only saw her a couple times a year because she lives in another country with his child. I got pregnant six months into the relationship with my first baby. My god, I was the happiest person in the world. He always told me he loved me and always showed me in the best way possible. Also, he always spoke to me about having another baby since he only had one child. Anyways, when I told him I was pregnant, I could sense something negative about his reaction. Whenever I brought up the pregnancy he always tried to change the topic. Then one night I asked him what his thoughts really were on the pregnancy. What he said shut me down like death itself. He said he thought I should have an abortion because our relationship was still fresh. He told me he also wanted to straighten out things with his child’s mother before we started a life together so nothing would hold us back. He kept piercing those words in my head, that it was the right thing to do and that I would get pregnant with him again. I cried for days and nights. I hated him; I hated myself. I couldn’t tell my family because they would never let me do the abortion. Anyway, I started to think it was the right thing to do until I did it, since I’m also young, and it would affect my career at the time. The day after the abortion, I broke down both mentally and physically. I wanted to kill him. I wanted to end my life. It’s only been months since I did it, and only the two of us know. I tell my family that it was a miscarriage. We are still together, but only god knows how I feel inside every day. I regret it, and I would never encourage any woman, young or old, to have an abortion—especially if its your first baby. I look at my ultrasound every day, when my baby was 6 weeks, 4 days, and I always wonder what that little tiny heartbeat would’ve become. I think I’m still in depression, but I try not to show it. I don’t hate my boyfriend either, but the feelings like before are not there anymore. If you have done it, ask god for forgiveness and learn from what you did. Abortion is murder, and remember, god always gets you through your tough times.