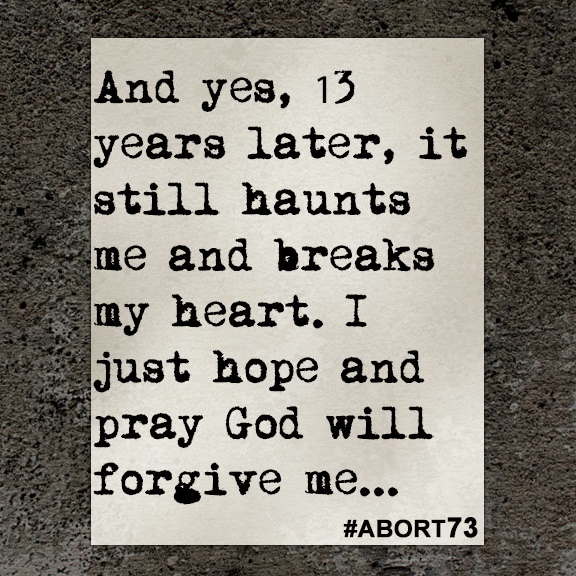 And yes, 13 years later, it still haunts me and breaks my heart. I just hope and pray God will forgive me...

I was with my first love, my high school love, for three years, but I’d known who he was since elementary school. I had always had a crush on him. We were together for over a year when I found out I was pregnant. I was 15, and he was 17. We were so excited! His mother was happy and wanted me to keep the baby also. I ended up telling my mother I hadn't started my period right away. She already knew what I was trying to tell her. I went to Planned Parenthood. I found out I was seven weeks. In my mind I thought I was going to keep the baby, but my mom was unhappy and kept insisting I have an abortion—because I was too young. She was afraid she would get stuck raising the baby. So I went through with the procedure. I was 13 weeks pregnant when I had the abortion. The pain was almost unbearable. I was crying, thinking I just wanted to say, "STOP! I don't want this.” But I just shut my mouth as my insides were being ripped up. That same day, I went to rest at my boyfriend’s house. He put his ear to my stomach and just cried because of what I did. He and I ended broke up a few months after the abortion. We still remained in contact until he finally started a family with another girl. To this day, I regret my abortion. I wish I would have kept my child. He/she would have been 13 or 14 years old by now. And yes, 13 years later, it still haunts me and breaks my heart. I just hope and pray God will forgive me.