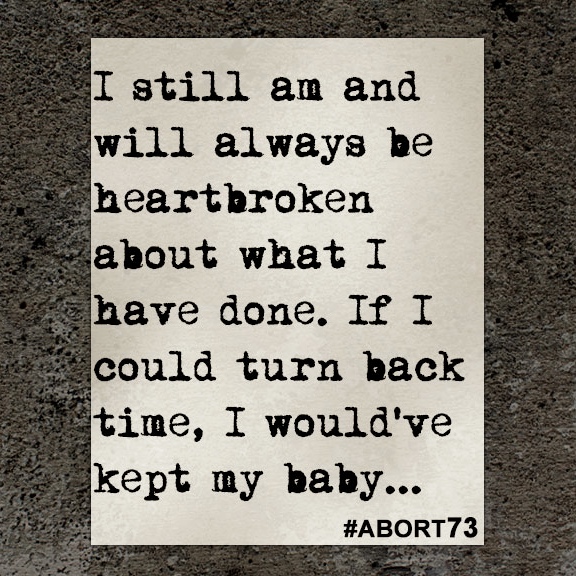 I still am and will always be heartbroken about what I have done. If I could turn back time, I would've kept my baby...

This is hard. I've only spoken about this once in my entire life. Here it goes. I was 14 when I fell pregnant. My boyfriend and I had been dating for four months when I woke up one morning feeling nauseous, I thought that I was probably just ill, and I never took it seriously. Two weeks or so past and each morning I felt sick. I started feeling sick in the evenings as well, and I knew that something wasn't right. I kept it quiet because I knew what the symptoms could mean, I didn't even tell my boyfriend. I wanted to wait and see if I would start with my menstruation that month. I waited a week and I never started. I knew. In my heart I knew. I told my boyfriend—who is five years older than me and is still my boyfriend. After I told him, he said that he would get me a few pregnancy tests so that we could be sure if I was pregnant or not. I took three. All of them showed positive.

I was completely shocked and confused. I was only fourteen years old at the time, which made everything that much more difficult for me to take in. My boyfriend and I decided that having an abortion was the best option for us, due to me being that young and him just starting with his new career. We wouldn't be able to look after our baby financially, and we were both too inexperienced. We kept it to ourselves for a while.

We went to the clinic one weekday. I had to skip school for the day without my parents knowing about it. At the clinic there were—to my surprise—a lot of women waiting to see the doctor. Long story short, I saw the doctor, and he told me I was 6 weeks and 4 days pregnant. He gave me a date for coming back to have my abortion, which was June 2, 2011.

After seeing the doctor that day I was heart broken. I started to regret ever going to the clinic. I was so hurt and scared. The fact that I was going to kill my own baby was killing me.

I was becoming more and more sick every day. My mother kept me home a lot thinking I had stomach problems or some sort of disease. She wanted to take me to the doctor more than once, and I had to convince her that I was fine.

The evening before my abortion, I cried myself to sleep. I had grown attached to the possibility of maybe keeping my baby, even though I knew I couldn’t.

We sat in the waiting room at the clinic waiting. My boyfriend had been there every step. After a while he had to leave me. He wasn't allowed to go in with me. There was a doctor and a few assistant nurses. Most of them were men which made me that much more uncomfortable. I had to lay on the bed naked underneath. The doctor started. I remember tears streaming down my cheeks. I was broken into pieces, and I felt the biggest feeling of regret I have ever felt. It hurt so much physically and emotionally. I remember the men staring as if they enjoyed seeing me in the pain that I was. All that I could think about was my baby and the huge mistake I was busy making. After the procedure I had an hour to sleep, and then I had to go home.

That evening I was bleeding so much it was shocking. I started panicking even though they told me that it would happen. Emotionally, I was damaged. I was constantly crying and feeling depressed. I missed my baby, and I felt like a murderer. My boyfriend didn't want to talk about it. He was hurt as well. I felt alone a lot in that time.

I still am and will always be heartbroken about what I have done. If I could turn back time, I would've kept my baby and worked through it at that time. I wouldn't advise anyone to have an abortion. It seems like the only solution at the time, but the decision you make will catch up to you, and it will make you feel regret for the rest of your life.

I will never forget my baby, but even though I'm hurt I have learned to forgive myself. If you have had an abortion as well, you should ask God for forgiveness and forgive yourself.