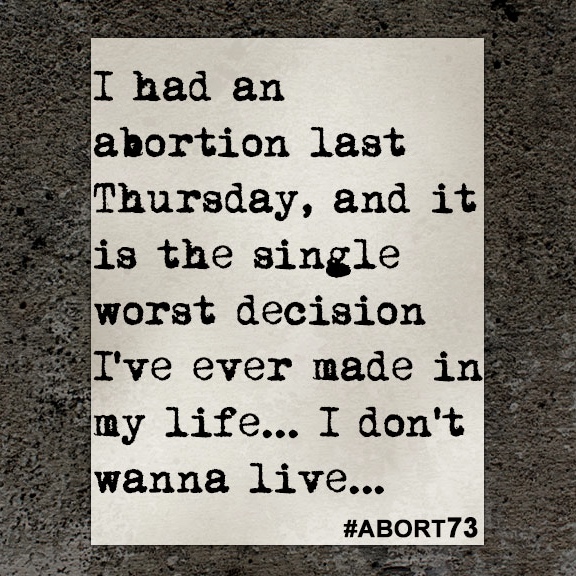 I had an abortion last Thursday, and it is the single worst decision I've ever made in my life... I don't wanna live...

I was 5-weeks pregnant when I found out. I was scared but excited because for the past year, all I wanted was a baby. I was slightly convinced I couldn't have children. I felt like my baby was a miracle, and I was pregnant by the man I've loved for the last four years. We were having problems but nothing that couldn't be fixed. When I first told him, he didn't think it was the right time because we were arguing a lot. He already has a daughter, and he wanted his next child to be born into a family unit—not separate households. Understandable. He would say that if I kept it, we'd move in together but that he actually preferred that we kept working on us and try again later. He kept reminding me that it wasn't the right time. One day we got into an argument, and he told me we'd be in separate households and that we'd be co-parenting. That scared the crap out of me because all I could imagine was my kid being without a father like I was, and I'd never want my baby to experience that. I went back and forth with myself about it every day. I was so stressed. Everyone told me to keep it, but I was afraid of being alone. Terrified actually, which in hindsight doesn't make sense because he's a single father currently and does an excellent job. I know we would've worked it out and been fine. I had an abortion last Thursday, and it is the single worst decision I've ever made in my life. I can't sleep, I don't wanna eat, go to work, go to school, talk to anyone. Nothing. I stay in bed and cry. The father is extremely supportive and stays through the verbal abuse. I would give anything to have my baby back. I'd rather have my baby than my own life at this point, and I can only see it getting worse. It's only been four days, and I don't wanna live. I deeply recommend anyone thinking about this not to do it.