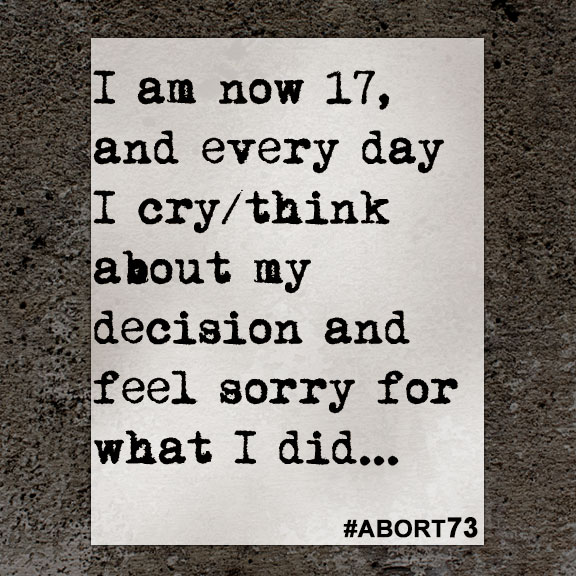 I am now 17, and every day I cry/think about my decision and feel sorry for what I did...

When I was 16 years old, I had an abortion. I was dating an 18-year-old boy for almost two years, and then he left me for a few months and talked to another girl. I was heartbroken and still believed him every time he came back that things would be better. I was so stressed, missing so much school, and just figured my period was late. I realized eventually I was nine weeks pregnant. When I told him, he basically said, “Tell me how much money you need, but other than that, take care of it yourself.” I was in shock. The kid who I thought was my absolute best friend was allowing me to go through this all alone. I did it without my parents, meaning I had to go through a judge to get it approved. Every day that I was making my trips to Planned Parenthood, he was hanging out with the girl he was talking to while somewhat being with me. I knew we were in a bad place, but I never could've imagined he would let me do it all alone. I took this very hard. My whole life I couldn't wait to be a mother, and I was so upset to be giving up a beautiful baby when there are so many women who aren’t able to have children. I am now 17, and every day I cry/think about my decision and feel sorry for what I did.