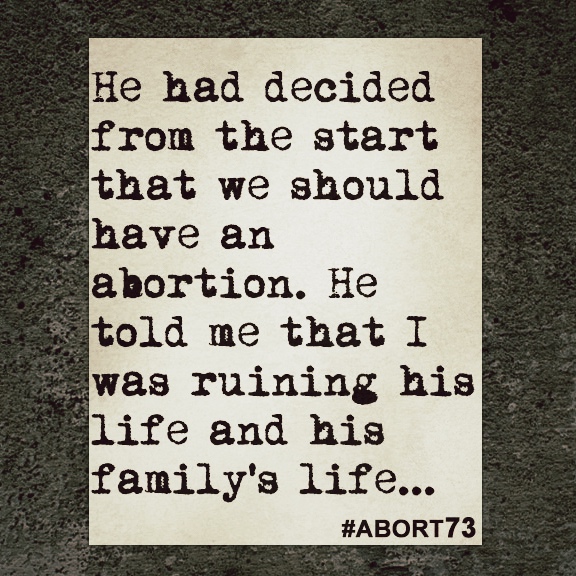 He had decided from the start that we should have an abortion. He told me that I was ruining his life and his family’s life...

I knew I was pregnant straight away. I could feel it from the start. I was pretty sure I was going to keep it; I was scared but a little excited—until I told the father. He had decided from the start that we should have an abortion. He told me that I was ruining his life and his family’s life. He told me the baby would resent me, and I would never be able to cope. At first, he said he would stick around and be miserable. But by the end, he made it clear he wouldn't be around. He wore me down. I wouldn't be able to have this child on my own, so I made the appointment. I was nine weeks, so I was able to have the tablets. They were horrible. They made me so sick. But they didn't work. Two weeks later, I had to go back for the surgical abortion. I saw the scan at 11 weeks. That broke my heart. I couldn't believe how much it had changed. It looked like a little person. But I didn't know what damage the tablets had done, so I had to go through with the abortion. Since then, it is all I think about. The father never talks about it. It doesn't seem to have affected him at all. But for me, every week that goes by I think about how far along I would have been.