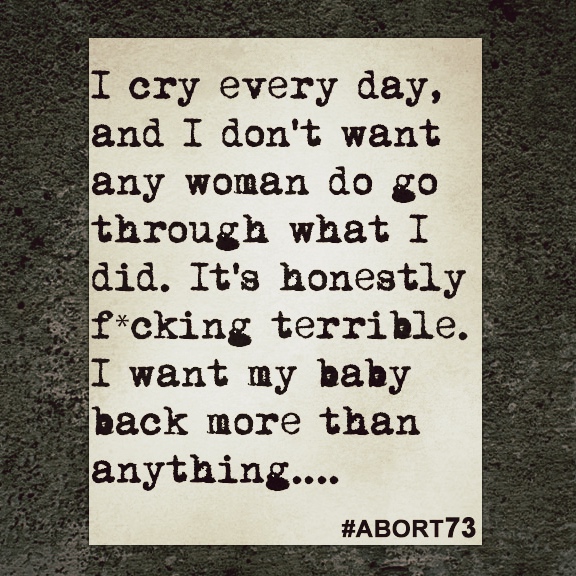 I cry every day... It's honestly f*cking terrible. I want my baby back more than anything...

It was January the 3rd, 2015, when I took a pregnancy test with my boyfriend at his house. It immediately came back positive. We were both SO happy, and he started to cry. We told our parents about three weeks later. My mom was very supportive of me when I told her I wanted to keep my baby. My boyfriend's mom was not. She talked to us and kept mentioning abortion. She later convinced my boyfriend to persuade me to get an abortion. His aunt came to my house, talking to my mom and me about how getting an abortion would be the right thing for me. I said, “I’ll do it.” It just seemed like the right thing to do. My appointment was on the 29th of January at 8:15am. I cried when they called my name. I couldn't do it, but I thought it was the right thing to do. I can't stop thinking about having a baby in me and waking up after surgery and feeling it's not there anymore. I cry every day, and I don't want any woman do go through what I did. It's honestly f*cking terrible. I want my baby back more than anything.