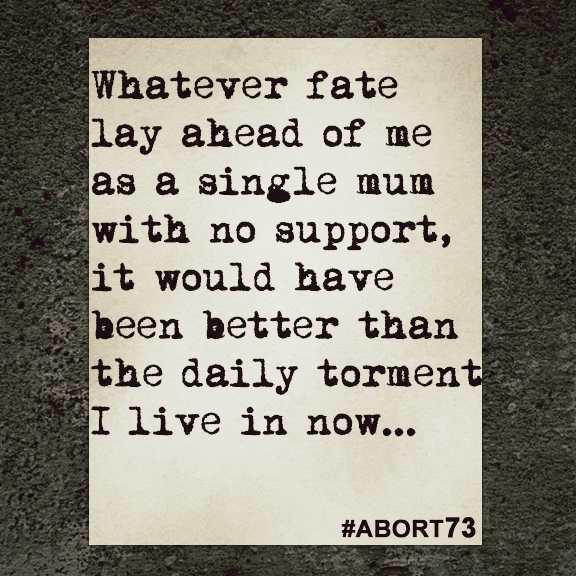 Whatever fate lay ahead of me as a single mum with no support, it would have been better than the daily torment I live in now...

My story may not be as harrowing or violent as many of the stories I read on this blog. It's a simple one. I was pregnant, and now I'm not.

A year ago to the day, my husband of one year and I hit a very rough patch in our relationship. He was out of work and not doing much about it.  Looking back at it, I believe he was suffering from depression. I didn't see it at the time. We fought a lot.  Shortly after meeting my husband, I became estranged from my family. They did not approve of his religious background. So it was just us two.

One morning I went out for a jog. I felt a strange and sharp pain in my stomach, so I decided to cut my jog short and walk home. Something told me to take a pregnancy test. I didn't give it enough time to read fully. It looked negative, so I threw it in the bin. All day, I felt really funny. When I got back in the evening, I thought about the test so I fished it out of the bin and looked again. There it was, the faintest and most life-altering line.

The next day, I took about five tests. They were all positive. It was a shock, but it was amazing how quickly I began planning and budgeting. I bonded with our child instantly. I always wanted to be a mum. To me, family was above everything. I told my husband. He fell silent. The silence lasted for about five days. He then sat me down and very calmly said, “It's not the right time, sweetheart. We're not doing well, and I don't have a job. I think you should have an abortion.”

My reaction was explosive. I shouted, screamed, and called him every name under the planet. Then I kicked him out of the house. How could he betray me so? This was his child! How could he not see that? Before that day, I believed that he would be there for me, but the worst day of my life came and I was utterly alone. He said if I went through with it that I would be on my own. Somehow, those words never left me. We spoke over the phone for the next three weeks. He sat on the fence the entire time while my life hung in the balance. I begged, pleaded, and promised him. I hardly slept. All I did was think—work out scenarios where it would be possible to make it as a single mum with no support. It looked to be a terrible life. What I feared the most was the kind of mum I would be—the kind of life I would give to this child. I was outraged at my husband. I’d walked away from my family—my whole support network—with the understanding that he would be my support in life. Where was he then?

Despite all my anger and aggression towards him, he still showed up at the hospital. It was the worst day of my life. It felt like labour, except it was a death. The moment I lost it was the worst feeling—an echoing emptiness that haunts me to this day. My husband picked me up, brought me home, and held me as I wailed for my unloved child. As the days moved on, I got stronger. Not a moment passed that I didn’t think about my baby—how old he would be, what he would look like, if my husband really would have left. If only I was stronger.

A few months later, my husband suffered a bout of grief and guilt. I couldn't find it in me to support him. After all, on his worst day he couldn't touch the anguish I felt. He apologized, begged for my forgiveness, promised a better future, and promised he would never do it again. A year later, I still remember. He has been good to me since, but I still remember. His presence is a constant reminder of his betrayal—and the child I never had.  The ending is yet to be written, but one thing is for sure. Whatever fate lay ahead of me as a single mum with no support, it would have been better than the daily torment I live in now. Aborting my child was the worst thing I have ever done.