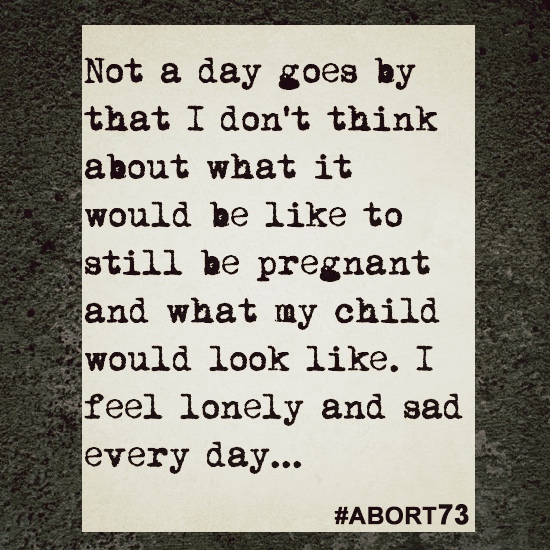 Not a day goes by that I don't think about what it would be like to still be pregnant and what my child would look like...

I'm 21 years old, and I got an abortion on October 7, 2014—a day I will never forget. I had met my boyfriend on my 21st birthday, so I’d only been with him for a short few months. I always told myself that I would never get an abortion. I always thought it was so cruel. I didn't get any pregnancy symptoms, but once I missed my period I knew I was pregnant. I never miss a period; I am always on time. As soon as I read the pregnancy test, I just filled with sadness because I knew what this meant. My boyfriend already has a daughter. He's 20 and his daughter is one. I knew right away that he wouldn't want another child—especially since we hadn't been together long. He was cruel about it from the beginning. He told me that I had no choice. and it was a made decision—I had to get an abortion. I told him that it was my body and my choice. I told him that he didn't have to stick around; I didn't need him and could do it on my own. He wasn't having it. I was confused and didn't know what to do. Everyone said it my choice but told me the smart thing to do was abort. I'm 21 and a senior in college. I knew that if I had the baby I wouldn't graduate on time, and it would be a huge responsibility. I always told myself that I would go to college and make a good life for myself before I had a baby. I wanted to make sure that baby could have anything and everything I wasn't able to have as a child. I was torn. I didn't know what to do. The father of my child thought I was "setting him up,” but the truth is I wasn't. I knew the consequences, and I was just as scared as he was. I couldn't bare waiting any longer, so I got the abortion as soon as I could. I was so nervous on the ride to the clinic and even more nervous as soon as I stepped in. I knew this wasn’t what I wanted to do, but I did it anyways. As soon as I woke up in the recovery room and realized what I did, I cried. Not a day goes by that I don't think about what it would be like to still be pregnant and what my child would look like. I feel lonely and sad every day. I will never be able to forget that day or what I did. I will never do it again.

For those of you that don't know what to do, make sure you take the time to think about what you really want. Forget what everyone else has to say to you. It’s YOUR decision!