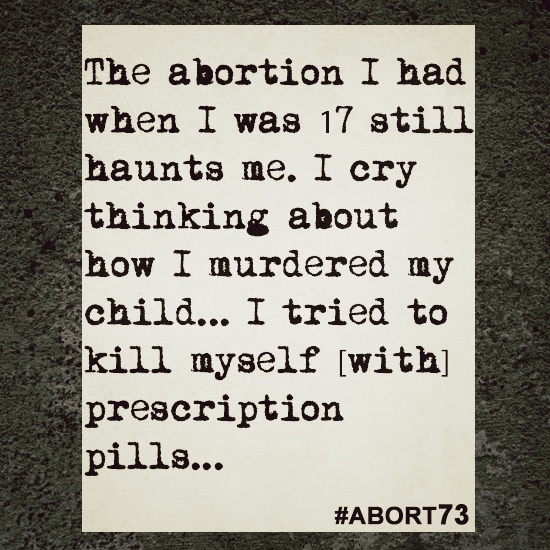 The abortion I had when I was 17 still haunts me. I cry thinking about how I murdered my child...

My boyfriend and I are having disagreements about abortion at this very moment. He wants it done, and I do not. I have had an abortion before. I am scared, and I do not want to be a single mother, but I also do not want to murder another child. I am 21, in college, and I have a job in my field of study. I have told both of my parents I am pregnant, and they have both agreed to be here for me but will not tell me what to do. They will just support me. The abortion I had when I was 17 still haunts me. I cry thinking about how I murdered my child—that I did not even give a chance. The father hated me for so long for doing it, and it just made matters worse. I tried to kill myself by taking various prescription pills. My body was like it was there, but I was not in it. I was so unfocused I stopped going to school. I had lost it so bad that I couldn't focus at work. I fell off of a ladder at work due to the pain I felt. The feeling after an abortion is horrendous and made me feel full of regret. Years later, here I am in a predicament where I can do something different, but because my current boyfriend does not want it, I told him I would get rid of it. In actuality, I am doing what is best for him, not what is best for me. So ladies, please remember it’s your body and YOUR choice. If you and the father aren’t ready, always remember that nobody is ever ready. Sometimes you have to make yourself ready whether you want to or not. If you truly don't want a child, there is adoption. I am speaking with him now and letting him know that if he doesn't want to be here, he doesn't have to. I will do it alone before I get an abortion. I have a GOD that I love and believe in, and I know he will show me the way.