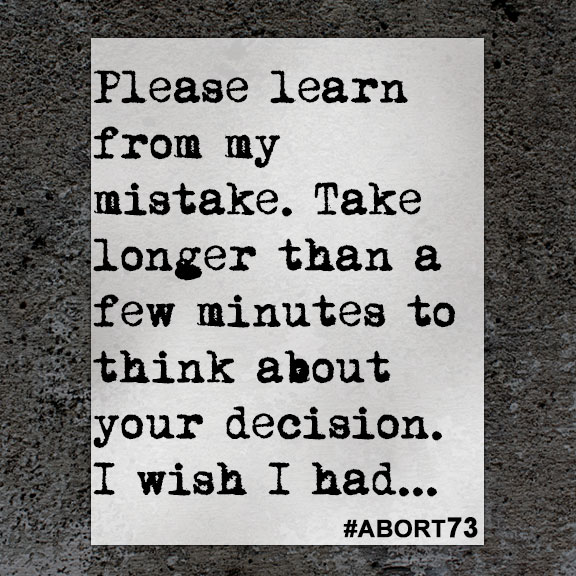 Please learn from my mistake. Take longer than a few minutes to think about your decision. I wish I had...

I'm eighteen, in college, and I made the dean's list. I do everything right, well I guess not everything. In college I fell for a guy who was abusive and mean. He called me names and made me feel bad about myself. During this relationship, an old friend called me. He lifted my confidence, and told me that I deserved better. I left my old boyfriend and fell in love with my old friend. He was living in a different state, so I went to go see him. He told me he was infertile, so we didn't use anything that night... Then, two weeks later, I missed my period. I didn't want it to be true, my mom had recently passed away and I passed the nausea and the missed period off as stress. My moods starting changing... I was hoping, no praying, it was just PMS. It wasn't.
I woke up one morning, and I knew I had to get myself checked. So I drove to the drugstore, got two pregnancy tests, went home and took them, and both were positive. However, I still didn't want to believe it. I then went to Planned Parenthood and got another tests and it was postive. I got scared, called my boyfriend, and scheduled an abortion for the next day. The abortion itself was not terrible; I could drive myself home. But the days afterwards were terrible. I keep thinking about my baby, and what I did. I was six weeks pregnant, which means my baby had a heart beat. I feel like a murderer. I did learn a few things [like] to not judge and to be more careful. People who get abortions are perceived as whores. I am not a whore; I'm a good kid. I made a mistake... Anybody who is reading this, please learn from my mistake. Take longer than a few minutes to think about your decision. I wish I had.