Abort73.com > Abort73 Blog > Why the Abortion Industry is Terrified of Kermit Gosnell

Why the Abortion Industry is Terrified of Kermit Gosnell 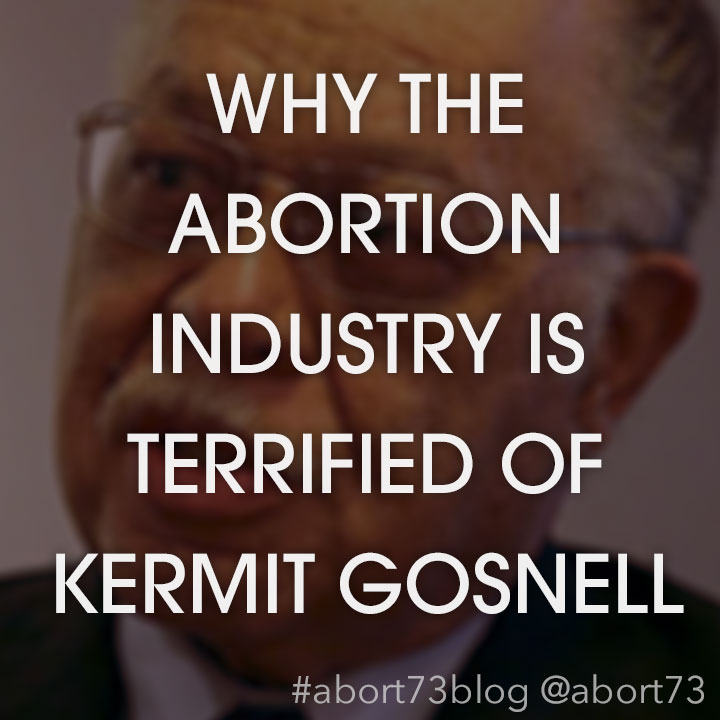 Any press is good press, so the saying goes. But this is not true for abortion. Planned Parenthood, the largest abortion-business in America, knows this full well—which is why their public talking points are built on euphemisms like "women's health" and "reproductive rights" instead of on "abortion." Despite hitching themselves to one of the most grisly practices known to man, Planned Parenthood has maintained a modicum of respectability by masterfully keeping abortion out of the spotlight—while quietly performing close to 1,000 abortions every day. As things stand right now, almost 30% of all the abortions in America take place at Planned Parenthood, and they increase their market share every year.

Compared to Planned Parenthood, Kermit Gosnell is a two-bit player in the world of abortion. The clinic he ran in Philadelphia was paltry by comparison. But now that Gosnell's abortion practice has made national headlines (violating the cardinal rule of abortion-business protocol), Planned Parenthood faces a dilemma. Do they condemn him as a public villain? Or do they stand with the man who shares their basic ideology? For more than two years, Planned Parenthood went with a third option: say nothing, and hope the seedy details of Gosnell's arrest fly under the radar.

Their strategy worked marvelously until this past week, when the national media's relative silence on the Gosnell trial became a story in itself. Suddenly, major news outlets were hustling to prove the criticism of their coverage was unfounded, and Kermit Gosnell became a front page story. Though you still won't find any mention of "Gosnell" on the Planned Parenthood website, they finally released a public condemnation of Gosnell on Friday via their Twitter Account. It reads:

‪#Gosnell‬ case is appalling. He ran a criminal enterprise, not a health facility, & should be punished to full extent ‪http://bit.ly/ZRyssI  ‬

The bit.ly URL included in the tweet links to an Oped by Dayle Steinberg, the president and CEO for Planned Parenthood Southeastern Pennsylvania. It was written on the heels of Gosnell's arrest in 2011 and argues that the "alleged practices" of Kermit Gosnell is proof that we need to further deregulate abortion in America. Yes, you read that correctly. She is arguing that we move in exactly the opposite direction of what common sense would dictate. In her own words:

The news of the alleged practices at Gosnell’s clinic prompted calls for stronger regulations of abortion services. The fact is abortion is already a highly restricted procedure, especially in Pennsylvania…  No new regulations can stop a physician who has decided to disregard the law. Restrictions that would further hinder access to safe abortion is not the answer, and will only increase the number of poor women who are forced by circumstances to turn to unsafe options for care.

If you think you've heard that argument before, you have—though in a completely different context. It's the same argument made by those who oppose placing further restrictions on access to guns. Since criminals don't get their guns through legal channels, they argue, further regulating those channels is not going to solve the problem of gun violence. The reason Steinberg's argument doesn't work in this context is because Gosnell was not a criminal operating outside the law. He was a licensed physician who performed abortions in a licensed abortion clinic. If abortion clinics didn't enjoy such a wide swath of political protection, Gosnell wouldn't have been able to maintain his license while going 17 years without a health inspection. The following comes from the District Attorney's grand-jury report:

After 1993… the Pennsylvania Department of Health abruptly decided, for political reasons, to stop inspecting abortion clinics at all. The politics in question were not anti-abortion, but pro. With the change of administration from Governor Casey to Governor Ridge, officials concluded that inspections would be "putting a barrier up to women" seeking abortions. Better to leave clinics to do as they pleased, even though, as Gosnell proved, that meant both women and babies would pay.

Seth Williams, the DA who oversaw the 2010 raid on Gosnell's clinic states, "My grasp of the English language doesn't really allow me to fully describe how horrific this clinic was -- rotting bodies, fetal remains, the smell of urine throughout, blood-stained." This is the context in which Planned Parenthood argues that the abortion industry is being unfairly targeted and unfairly regulated. And herein lies the problem. Despite their tweet of condemnation, Planned Parenthood fights for the right to do virtually everything Gosnell is accused of.

Their recent opposition to Florida's born-alive bill indicates their belief that abortionists should be allowed to "finish the job," if the baby should be accidentally born alive. And though they finally reneged on their opposition to the bill amidst a public outcry, they couched their reversal under the claim that babies are never born alive anyway. The argument made by Planned Parenthood Southeastern Pennsylvania, and affirmed by the entire organization through last week's tweet, indicates that Planned Parenthood believes abortionists should be allowed to work independently of government intervention. While claiming to "condemn any physician or health-care provider who [does] not follow the law," they do everything they can to remove any law that might actually regulate abortion in a meaningful way. And isn't it telling that Planned Parenthood doesn't condemn Kermit Gosnell for murdering a baby? They condemn him for breaking the law. If the law protected infanticide, it's doubtful that Planned Parenthood would even raise a fuss.

Kermit Gosnell was greedy for gain. By all accounts, so is Planned Parenthood—as evidenced by the revelation of former insider, Abby Johnson, and more recently, by the suspension of Planned Parenthood's abortion operations in Delaware. Dayle Steinberg claims that "Planned Parenthood maintains strict policies and procedures to ensure the highest standard of health care"—and yet they have been plenty guilty of cutting corners in the service of their bottom line. Abort73's latest video argues that Planned Parenthood is right in failing to make a clear moral distinction between abortion and infanticide, and this is the point I'd like to end on.

Stephen Massof, an unlicensed medical school graduate who assisted Gosnell, pleaded guilty to third-degree murder charges in the deaths of two babies who were born alive at Gosnell's clinic. He described their deaths as "literally a beheading." When things were busy, he said, "it would rain fetuses. Fetuses and blood all over the place." The state is seeking the death penalty for Gosnell on the assertion that, "A doctor who cuts into the necks severing the spinal cords of living, breathing babies, who would survive with proper medical attention, is committing murder under the law."

With those images in mind, take a few minutes to read through Abort73's Abortion Procedures page—and as you read through these medical descriptions, ask yourself whether there is any moral difference between violently destroying a baby before birth and violently destroying a baby after birth. Though Kermit Gosnell doesn't have any of Planned Parenthood's polish, he seems to share all of their principles, and that's what has them shaking in their boots!