Abort73.com > Abort73 Blog > What if Colin Kaepernick Were Protesting Abortion Instead?

What if Colin Kaepernick Were Protesting Abortion Instead? 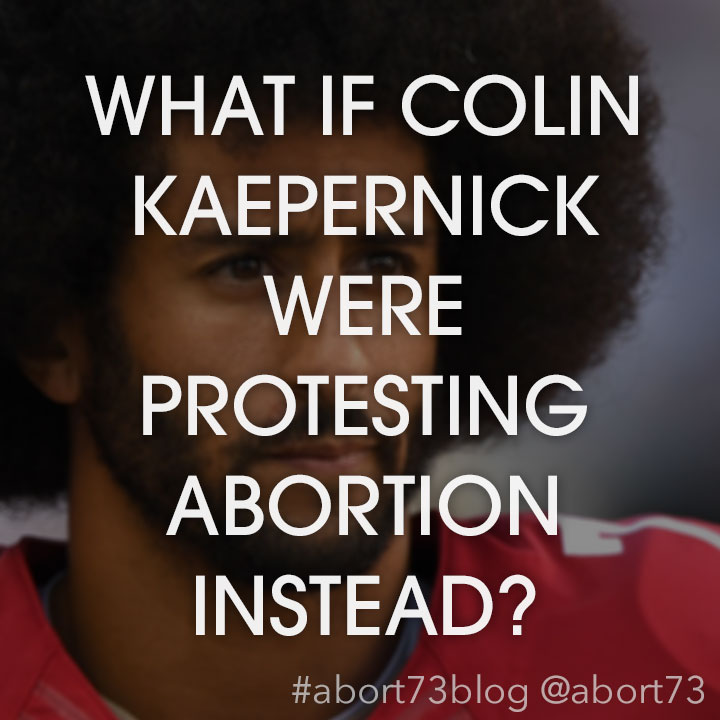 I sort of enjoy playing devil’s advocate. Could that be a spiritual gift?! Either way, I find the furor over Nike’s Colin Kaepernack ad to be a bit perplexing, especially since no one had yet seen the commercial when the firestorm first began. By way of full disclosure, I’m a Nike guy. I have been since the 6th grade—when I started caring enough about sneakers to pay extra for the swoosh. And if my beloved Clemson Tigers or Washington State Cougars ever switched their uniform contracts to Under Armour or Adidas, I would honestly struggle to root for them. That’s crazy, I know, but I’ve become rather snobbish about branding.

More to the topic at hand, Nike is in the business of selling shoes, and they’re very good at it. I can only assume then that they’re taking on Colin Kaepernick—and all his baggage—because they think he will help them sell more shoes. And they’re probably right. The now-released commercial isn’t going to supplant Mars Blackmon in the Nike pantheon, and would have benefited from a professional voice actor, but it's plenty impressive and inspirational. It could easily gain Nike more business than it costs. That’s because they make a great product, and they market it masterfully. The same goes for Chick-fil-A and In-N-Out. For all the political outrage these brands have caused, there’s no getting around the fact that massive amounts of people are desperate to buy what they sell. That, in fact, is how you become politically bulletproof. You make something the masses are unwilling to live without.

Colin Kaepernick, of course, is not a brand or a corporation. He’s a person, who’s been both hated and heralded for his principled refusal to stand for the national anthem. Nike celebrates him for “sacrificing everything” for his beliefs, while his detractors argue that he knows nothing of true sacrifice. At this point, it would be helpful to introduce a hypothetical scenario that I’m borrowing from a friend—because I find it tremendously helpful. You see, Colin Kaepernick isn’t the only high-profile, high-controversy quarterback to be without a job in the NFL. He’s not even the only one born in 1987. In case you’ve forgotten, the other one has been running around minor league outfields for the last couple years. That’s right, Tim Tebow—the darling of the Bible Belt—who created significant controversy of his own for appearing in what was billed to be an anti-abortion Super Bowl ad. Kaepernick is beloved by the political left; Tebow is beloved by the political right, and yet both are men of faith and conviction.

For those of you who share my conviction, that abortion is a violent injustice, here’s a question for you to consider. Have you ever wrestled with the implications of saluting or pledging allegiance to a nation that sanctions and subsidizes the daily, nationwide slaughter of innocent unborn children? Have you ever agonized over where your allegiance to nation ends, in light of your overarching allegiance to the God who created you? For the record, I do stand for the national anthem. I always have, but I can’t say with any certainty that I should be standing, or that it’s my patriotic duty to do so. That’s why, if Tim Tebow were to suddenly declare, “I can no longer stand for the national anthem, because of our nation’s bigotry and violence towards unborn children,” I would admire and support his decision. If he were to decide that he was going to kneel in protest and prayer, as a means of drawing attention to this horrific injustice, I would say, “Amen!” How about you? Would you call him an unpatriotic ingrate, or would you show him deference and respect?

I suspect that many of those exhibiting the most vitriol towards Colin Kaepernick would feel very differently if it was Tim Tebow taking a stand against abortion. And if that’s the case, then isn’t our criticism of Colin Kaepernick a bit naive and disingenuous. We keep insisting that it’s not the message that’s the problem; it’s the means. But is that really true? Are we angry because he’s “disrespecting the flag,” or are we angry because we don’t like his argument, or his socks, or his T-shirts? I’m fairly certain that if Tim Tebow, or someone on “our side,” were using the same tactics to deliver a different message, we’d be a whole lot more sympathetic. And just to clarify, I do disagree with Kaepernick’s basic assertion, that our nation’s police force is systematically racist, but I’ve come to admire his willingness to stand for something he believes in—at great personal cost. And who am I to blankly condemn someone for wearing a controversial T-shirt?!

If Colin Kaepernick were a more polished and consistent football player, I’ve no doubt he’d be on an NFL roster. So would Tim Tebow. But it’s also true that if Colin Kaepernick hadn’t started protesting during the national anthem, he’d likely still be suiting up on Sundays—assuming he could reconcile himself to being a backup. Kaepernick is good enough to play in the NFL, but not good enough to be an embarrassment or distraction. That requires elite-level talent. As in all walks of life, the better you are at something, the longer the leash you’re given. Kaepernick’s political activism may have cost him a job, but so did his inconsistent play. It’s a little bit of both—no matter what the courts wind up ruling in his pending lawsuit. Generally speaking, if you don’t have breakout skills, you’re better off toeing the proverbial line!