Abort73.com > Abort73 Blog > What Can We Learn from the Documentary Hush?

What Can We Learn from the Documentary Hush? 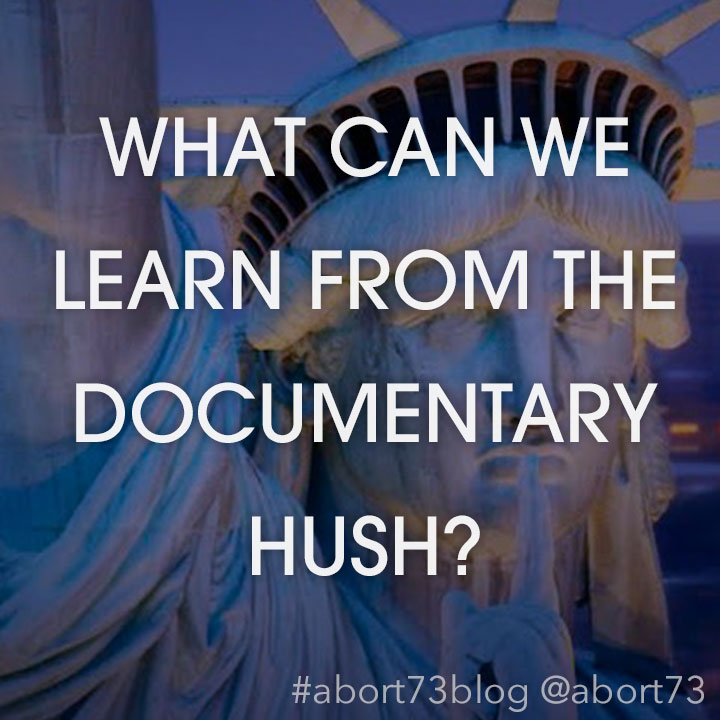 Not to be confused with the horror flicks of the same name, Hush is a 2016 documentary about the health risks of abortion—primarily the disputed connection between abortion and breast cancer. The filmmaker, Punam Kumar Gill, is a Canadian woman of Indian descent whose own story infiltrates the narrative in some unexpected ways. Though she describes herself as a "pro-choice" feminist, Hush is unlikely to find many fans within that particular subset—which is too bad. I've watched it twice now and find it extremely compelling.

Despite billing itself as unbiased, Hush has been roundly criticized for its perceived partisanship. Leading the charge is David A. Grimes, the prominent North Carolina abortionist who did a lengthy on-camera interview for the film. After seeing the finished product, he penned an op-ed for The Huffington Post, calling Hush an exercise in hubris and hypocrisy. It's not hard to understand why; Dr. Grimes comes off looking arrogant and out-of-touch, though not all of that can be blamed on the filmmakers!

One of Grimes' primary complaints is a perceived lack of parity. By his count, the film features 20 people who believe abortion harms women and only two who do not. He further asserts that none of the witnesses in the first camp have the credentials to be taken seriously. He even goes so far as to say that the amount of research done for this film would have been "inadequate for a college term paper"—which strikes me as a rather ridiculous assertion. The film is extremely ambitious in both its breadth and depth. Even after close to 20 years of vocational opposition to abortion, I still managed to learn a few things (like the fact that the World Health Organization classifies oral contraceptives as a Group 1 carcinogen).

Before getting to the meat of Grimes' criticism, some context might be helpful. The first study to find a link between abortion and breast cancer was published in 1957. In the decades since, more than 50 studies have followed suit. Most of them have found a statistically significant increase in breast cancer incidence among women who’ve had an abortion. Nevertheless, all of the major medical organizations categorically deny any connection between abortion and breast cancer—on the assertion that the studies that did find a connection were compromised by "response bias." This despite the fact that researchers are at a loss to explain why the incidence of breast cancer has increased so dramatically since 1980 and why its trajectory almost exactly mirrors that of abortion. The correlation, as documented by British statistician Patrick Carroll, is more than .9—a discovery that's allowed him to accurately predict breast cancer incidence based on the reported abortion numbers from a decade prior (ten years is the amount of time it takes cancer cells to develop to the point of detection).

Though Grimes' complaint about the lack of parity may seem a fair one on the surface, there are a few things to consider. First, Kumar Gill personally contacted the American Cancer Society (ACS), the Canadian Cancer Society (CCS), the National Cancer Institute (NCI), the World Health Organization (WHO), the American College of Obstetricians & Gynecologists (ACOG), the Royal College of Obstetricians & Gynecologists (RCOG), and the Society of Obstetricians & Gynecologists of Canada (SOGC) to see if any of them could make a spokesperson available to interview for the film. All seven denied her request. Some were apologetic ("Sorry... [we] haven't been able to locate anyone."); others were downright combative ("We cannot even dignify the topic with an interview because the case is closed."). In other words, parity is hard to come by when one side is largely unwilling to talk.

Grimes explains these refusals on pragmatic grounds. They have more pressing matters, he asserts, than to pander to an independent filmmaker. In his HuffPost piece, Grimes complains that Gill never asked him for the names of other pro-choice scholars. Perhaps she should have, but would they have been any more willing to discuss the science than Grimes was? Like the medical orgs before him, Grimes employs a sort of "pass the buck" defense in which he simply parrots the same talking points—namely that all of the major medical organizations deny any link.

On their various websites, the "proof" for such assurance is a 2003 NCI conference that purportedly settled the issue. After viewing video of the entire conference, Gill points out that their sweeping conclusion was based on a harried, 20-minute presentation that excluded all dissenting voices. Since 2003, new studies from around the globe continue to roll in, solidifying the connection between abortion and breast cancer—though Grimes maintains that it would be unethical for the medical community to revisit the issue. The science is already settled, he insists, and he is incredulous at the suggestion that the adverse physical and psychological effects of abortion could possibly be suppressed for political reasons.

Perhaps Grimes has forgotten that the science was once just as settled with regard to cigarette smoking and hormone replacement therapy (HRT)—until it suddenly wasn't. Despite prior assurances to the contrary, smoking and HRT are now conclusively recognized to increase a woman's risk of breast cancer. Dr. Pierre Band is the physician who was able to make sense of the heretofore conflicting data by noting the role that a woman’s age and birth history play in determining her susceptibility to breast cancer. Women who begin smoking within five years of their first menstrual cycle and before delivering a full-term pregnancy are roughly six times more likely to contract breast cancer than women who do not. Dr. Band believes the same considerations can help untangle the confusion regarding the relationship between abortion and breast cancer.

Much like the abortion industry today, tobacco companies worked the political system for years in an effort to cover up the health-risks of smoking. Why does Hush feature more physicians and scholars who believe that abortion is a serious health risk than those who don’t?  Because those trying to maintain the status quo have little to gain by entering into debate. Better to let sleeping dogs lie, as the saying goes. Furthermore, those denying the health risks of abortion have long enjoyed a sort of media monopoly. We’ve already heard from their side; it’s time to give the other side its due. That’s why David Grimes’ criticism doesn’t bother me much, especially when paired with his insistence than any scientist who is ideologically opposed to abortion cannot be trusted. So far as I can tell, it is the “pro-choice” scientists who are more likely to have an insidious and profit-driven agenda.

It is on the point of profit that I have my only real complaint about Hush, if you even want to call it that. As of now, the only way for most people to view Hush is by buying a digital copy for $24.99 or renting it for $8.99 (though you can save 10% with the discount code “ABORT73”). I understand that movie production is expensive. I understand that the filmmakers are simply trying to recoup some of their costs, but I can’t imagine any casual viewer being willing to spend $9 to watch a documentary about the health-risks of abortion. And I certainly can’t imagine a scenario in which someone who is sympathetic to abortion would do so. The kinds of people this movie most needs to reach are the kinds of people who probably won’t pay to see it. And so I pin my hopes on Netflix. From what I understand, the filmmakers are trying to work out a deal. I pray they’re able to do so!