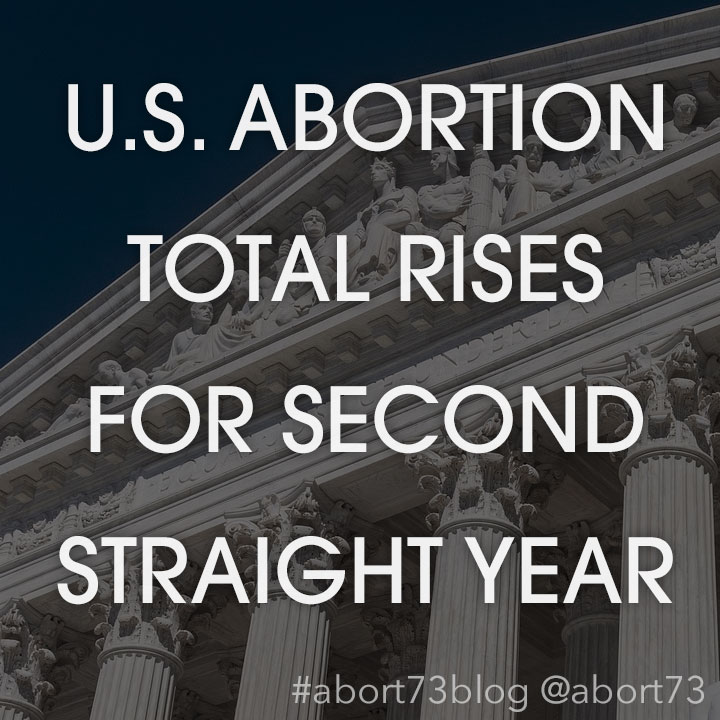 Today marks the 48th anniversary of the Supreme Court verdict rendered in Roe v. Wade—the verdict that unilaterally struck down all state prohibitions against abortion. When I first began as a full-time anti-abortion activist, Roe was a mere quarter-century old. I’ve been fighting abortion for a generation, and in every year but two (2006 & 2008) I had the satisfaction of seeing America’s annual abortion total decrease. Until now, that is. For the first time since 1985, the U.S. abortion total has risen two years in a row. It’s not official yet, but enough data are in to make it all but certain. Abortion rose in 2018—which the CDC confirmed this past November—and it looks to have risen again in 2019.

As of this morning, Abort73 has obtained 2019 abortion totals for 26 states. Statistically, these states account for roughly 39% of all U.S. abortions. That’s enough to reasonably extrapolate a total for the whole country—which I have done. Using the same system I’ve employed for the last several years, to estimate U.S. abortion totals ahead of Guttmacher or the CDC, I can say that somewhere around 883,000 U.S. abortions took place in 2019. This includes both surgical and medical abortions and represents a 1.8% increase over 2018. The percentage of babies aborted—which measures abortions against live births—increased by 2.3 percent. These are not happy tidings, and while there is some hope that the 2020 lockdowns have led to fewer abortions, I’m not at all certain that was the case. Consider the following excerpt from a recent submission to Abort73. It came from a 30-year-old woman in Phoenix, AZ:

Early in 2020, [my husband and I] started talking about having a second child, and we were working on that, but then this crazy pandemic happened and the economy took a hit and everything started going nuts...

April 25th was the day that we knew we were pregnant, and May 17th was when we found out that I would be laid off from my job. What can I say? Words cannot express how I felt. My husband and I had some really tough conversations about what we were going to do...

During one of these talks, I told him about my two abortions. He was surprised and a bit shocked, but he was understanding. I knew abortion was going to be our best option, and I knew that telling him about this would let him know that I was comfortable with this choice. This was not an easy decision, and trust me when I say that we both lost five years of our life expectancy simply by talking about this option—but it was the world around us that made the decision for us.

Finding an appointment at a clinic within the next two weeks was impossible. The restrictions from this pandemic were probably not helping, but I know it was the thousands of women like me who were being forced to make a difficult decision all at the same time. I knew about the abortion pill, but I was really close to the 10-week mark already. The restrictions on staying home helped us out immensely! I was starting to show, and I was going through the pain of being pregnant, but staying at home kept everybody from knowing about this.

Yes, the fact that some abortion clinics had to close their doors in 2020 almost certainly saved some lives, but it’s also possible that the economic and emotional trauma that was thrust upon our nation over the last year could have ultimately resulted in more abortions. We won’t know for sure for another year or more. In the meantime, we do know that the abortion rate rose in 20 of the 26 states who have reported so far for 2019. The most dramatic increase belonged to Iowa, whose abortion percentage increased by 23% over 2018. Why? Because Missouri, their neighbor to the south, essentially exited the abortion business in 2019. Their year-over-year abortion total was cut almost in half—from 2,910 to 1,471. Praise God! That’s a reduction of almost 50 percent. Some Missouri women clearly went to Iowa for an abortion. Others likely went to Illinois—which has yet to report for 2019—but plenty more didn’t. They kept their baby. And that at least is a ray of sunshine in a very dark year.

Listed below are the six states that saw the biggest increase in abortion—among the 26 reporting states, followed by the six states where the abortion percentage decreased the most:

Just as a dramatic decrease in Missouri abortions led to an increase in Iowa abortions, so too did a clinic closure in West Virginia lead to more abortions in Kentucky. Here again, the cynic will say that if abortion goes down in one state, it just goes up in another. But this isn’t entirely true, and it misses the broader point. Some women are willing and able to cross state lines to violently end the life of their baby, but many aren’t. It’s not a zero-sum game. And the lives saved as a result of these purely pragmatic obstacles to abortion are every bit as real and significant as those saved through a changed heart. There is also real moral value in excising abortion from a given state. Even if women cross borders to obtain an abortion, so be it. A crucial line of demarcation has still been drawn. We are a state that doesn’t kill babies. If you don’t like that, live somewhere else.

Sadly, our task is about to get harder. This week also saw the swearing in of a purportedly Catholic President who is radically committed to abortion. He has promised to do everything he can to take away the ability of states to limit abortion. He has also promised to restore funding to Planned Parenthood—the largest abortion business in America—and to once again fund abortions globally. This is why Planned Parenthood loves President Biden. He has promised to be their man. If you doubt that, just take a look at his campaign website where he explicitly declares his intention of reversing all the anti-abortion measures implemented by President Trump, along with those that preceded him.

For all sorts of reasons, it broke my heart to see Joe Biden ascend to the office of the President—knowing the practical contempt he holds for the most innocent and helpless members of the human community. Then again, all things work together for the good of those who love God and are called according to his purpose. I say that not to justify apathy or acquiescence, but to remind us that God is bigger than our political failures. “Let the children come,” Jesus said. “Do not hinder them, for to such belongs the kingdom of God [but] whoever does not receive the kingdom of God like a child shall not enter it.” That's worth our meditation, this year and every year.